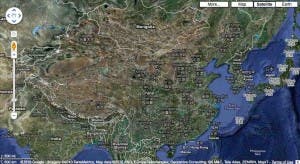 The State Bureau of Surveying and Mapping (SBSM) are currently handing out surveying licenses to online services who want to provide a maps of China on line.
Around 70-80 companies have submitted applications some of which have already been granted to Tencent, Baidu, Alibaba, Sohu and Sina. The only foreign company to apply and recieve a license is cell phone giant Nokia.
According to sources at the bureau, they have yet to receive an application from Google, but are expecting to meet with a company representative soon.
Google managed to renew it’s IP in China this year after tense stand off with the government which lasted several weeks. The IP renewal doesn’t automatically mean a mapping right however, which could mean Google having to shut down it ‘Maps’ service for the mainland.
Microsoft who also offer maps for the mainland have still yet to apply for their license too.