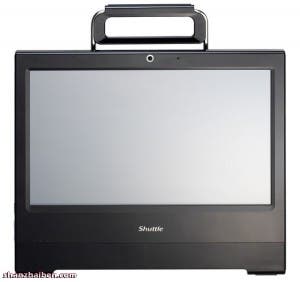 Wow these all in one computers are really starting to roll out of the factories and in to the store.
The latest AIO (All in one) the Shuttle X50V2 is a beautiful example of original styling and proves that now all Chinese PC’s need to look like Mac knock off’s to be worthy of a second look.
It might not suit everyone’s tastes but I love the simple styling of this briefcase inspired PC. The 2700 Yuan ($400) unit uses is fan-less which means it’s going to be uber quiet, and those low energy Atom 1.66 Ghz CPU’s inside aren’t going to get too hot anyway. Graphic duty is taken care of by GMA 3150 card, which should be enough to provide nice clear visuals on the built in 15.6 inch LED back lit screen.
There’s also a 1.3 megapixel front facing web cam, WIFI, Ethernet, a built in 2w speaker, SD card reader, VGA out and space for up to 4Gb of ram. There’s even room for an extra 2.5 inch SSD hard drive!
Best of all there is a built in handle on the top and it the whole unit weighs in at only 3.6kg meaning you could take it to the coffee shop like that guy in the U.S does with his iMac.