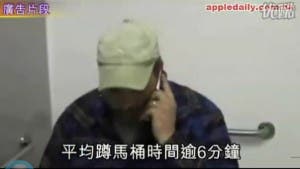 Hemorrhoids more commonly known as Piles is a very uncomfortable condition, one which we would all like to avoid.
According to this video posted by Hong Kong based site Apple Daily iPhone users have an 82% greater risk of developing the uncomfortable condition due to the addictive nature of their phones and apps.
iPhone users, according to the video, generally spend 6 minutes on the toilet each time they visit doing their do, playing games, checking emails, surfing the web or good forbid having a Facetime chat. This prolonged use of the toilet is putting those technoholics a risk of developing Hemorrhoids or other bathroom related problems!
Just to compare the average time spent on the loo is 2 minutes, 4 minutes less than iPhone (smartphone) users.
Video after the jump