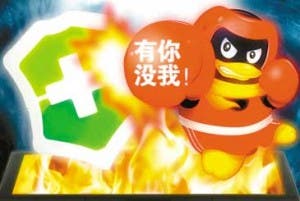 China’s 2 largest software companies Tencent (developers of the famous QQ software) and 360 (developers of a hugely popular anti-virus system) have been at each other throats since the beginning of September.
Rumblings stared when 360’s privacy protection software claimed that QQ software had been used to illegally scan users private documents, an accusation which Tencent have flatly denied.
Tencent later threw down the gauntlet saying from 3rd November they would no loner allow their software to be installed on PC’s currently running 360’s Anti-virus software effectively making users choose between the 2 giants!
Netizens were quick to voice their feelings with more than half of Tencent,s 600 million QQ users saying they would be happily to turn their back on QQ if forced to make a choice!
With so much to loose it will be interesting to see how Tencent will react to this latest battle blow.
Keep posted for updates.