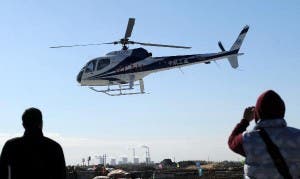 With unmanned lunar probes whipping around the moon, astronauts moon walking, high speed trains that can hit over 1000 km/h and a bus which straddles traffic jams, its easy to forget that China is pretty new to the technology race. Which is why it was such a shock for us that to learn that China’s first civilian light helicopter made it’s debut flight on Monday.
The 2-tonne AC311 helicopter developed and manufactured by the Aviation Industry Corporation of China (AVIC) has seating for up to 6 and is designed for training, police use, aerial photography and forest fire prevention.
The picture here shows the AC311 making it’s maiden flight in Tianjin.

Next Apple Peel 520 Gets 3G Update Headed To The U.S On Sprint