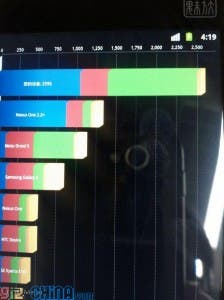 The Meizu M9 smart phone is no slouch as it is currently available running Android 2.2, but these images spotted over at a Chinese Meizu forum show that are favorite Chinese smart phone is going to get a good dose of super charging once its 2.3 Gingerbread update ships!

The images below were taken by an engineer working on the Gingerbread Android 2.3 OS for the Meizu M9, and show the results of a bench test. The results are astonishing!

The Gingerbread powered M9 scores a lightning fast 2595 points! Which, to give it some perspective is faster than the Nexus One, Motorola Droid X and Samsung Galaxy S to name just a few.

The update is said to be available by the end of March and will hopefully bring with it other bug fixes and functions.

Next iPad 2 Owners Complain Of Back Light 'Bleeding'