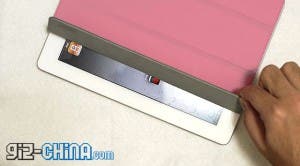 The iPad 2’s design may have leaked out months before the actual tablet launched, but Apple did a damn fine job of keeping those Smartcovers under wraps. Thanks to the extra secrecy of the magnetic covers Chinese manufacturers have had a hard time catching up and releasing a cheaper alternative.

MICgadget managed to get their hands on one of the first magnetic smart cover clones and were less than impressed with the price, quality or smell!

Next Blackberry Playbook Delayed but Why?