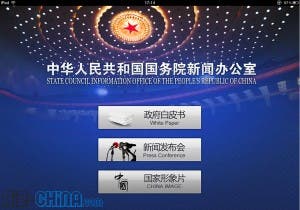 The SCIO App developed by CNTV has been designed to promote Chinese development and policy internationally. The free app currently allows users to read through 25 White papers published by the council between 2005 and 2010, watch video clips of press conferences and even has 2 films about China’s national image with English dubbing.

It all sounds like super riveting stuff….. such a shame my wife has the iPad today…..