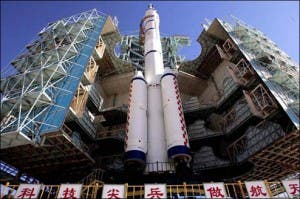 Officials from the Chinese space program have been voicing there doubts about SpaceX’s claims that the privately owned companies new heavy lift rocket will be able to send payloads to low earth orbit at the super low price of $1000 per pound.

In an interview with Aviation Week and Space Technology, Lei Fanpei, Vice President of CAST, expressed how he would love to develop space trade with the United States, but voiced concerns that China’s current range of rockets would not be able to compete on price with the rockets currently in development by SpaceX.

SpaceX’s planned Falcon heavy lift rocket is being designed to carry payloads of 117,000 pounds, while China’s Long March 5 will only be capable of carrying 55,000 pounds once developed.

Next Space Tourism Coming To China