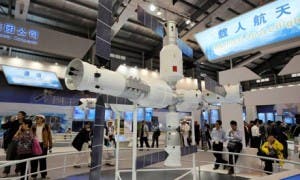 Plans for China’s first space station were released yesterday along with a competition for the public to name the 60 tonne space outpost.

The project is expected to be complete within a decade and will see the 60 tonne 18.1 meter (59.4 foot) long space outpost built from a central hub with ‘pods’ for living and conducting experiments in added to the central structure.

The Chinese space station will only be the worlds 3rd multi-module space station behind the Russion Mir station and the current ISS which is expected to be shelved by 2020.

China’s space program has been moving at an impressive rate it was only 10 years ago that the first Chinese rocket lifted off and only 3 years ago that Chinese astronauts completed their first space walk.