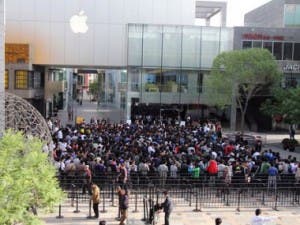 Apple’s recent decision to make China its top priority seems to be paying off, which was evident yesterday during the official launch of the iPad 2 on the mainland.

Despite the iPad 2 being unofficially available on the grey market since launch, Chinese Apple fan’s spirits hadn’t been dampened with Apple stores in Beijing and Shanghai reporting crowds of eager people arriving as early as Thursday night in preparation for the Friday morning launch.

Security guards at a one store claimed that there was a queue of more than 500 people at 4 a.m in on Friday morning when they arrived at work, a number which had doubled by opening times.