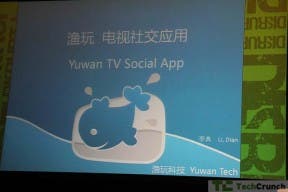 Chinese start-up Yuwan, may have only been formed in September of this year (2011) but they already have a great app up their sleeves!

The Yuwan TV Social App, shown off at Disrupt in Beijing, is designed for China’s TV loving demographic (pretty much everyone) to ‘check in’ to their favorite TV shows or even adverts and share thoughts and comments with like minded fans.

According to the developers behind Yuwan, television penetration is 97% in China giving the application huge potential!

Techcrunch have a video demonstration of Yuwan here, along with other China technology start-up news from their Disrupt developers event in Beijing.

Next Expand your social circle with Huohua