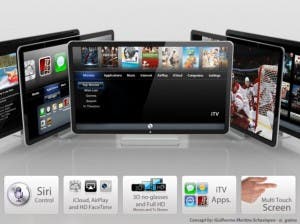 It certainly looks as though Apple are planning a TV, with rumors starting over the possibility over a year ago and recently rekindled by Steve Jobs’ biography.

Spurred on by these rumors and hint, Flickr user Guilherme Schasiepen has cracked open his CAD platform of choice and whipped up the above concept of what an Apple TV could look like.

The design takes a little inspiration from a number of current Apple products such as the touch screen of the iPad and iPhone, the overall look similar to the iMac and the screen looking very similar to the Macbook Pro screens.

Below the concept sits a few tech specs which the designer has decided to give his interpretation of the Apple iTV such as Siri voice control, iCloud and Airplay, HD 3D, touch screen and Apps!

Next Android Tablet Hacked In To A Games Console