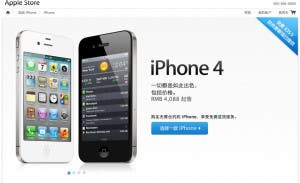 China’s version of the official Apple store dropped listings for the iPhone 4 in both 16GB and 32GB models earlier today and is now only selling a cheaper 8GB model.

While it is common for Apple to drop larger capacity iPhones before the introduction of the latest model, it is a little surprising at how early they have done so in China as an official launch date for the iPhone 4S still hasn’t been announced.

Apple customers in Hong Kong were able to start placing pre-orders for the iPhone 4S yesterday, in preparation for its launch on 11th November. Could Apple be pulling a dual launch and also be releasing the iPhone 4S in China on the same day?