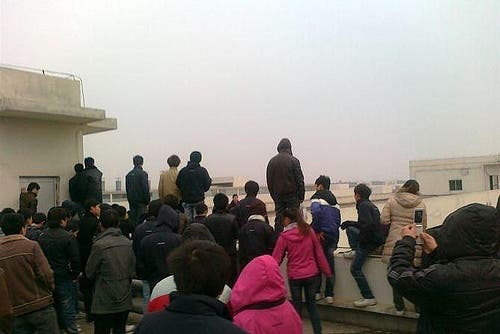 Hundreds of Foxconn workers from a Foxconn factory in Wuhan staged a protest over unpaid wages, with hundreds of workers standing on the factory roof threatening to jump if they didn’t receive payment!

Foxconn technicians from Wuhan totaling more than 300 entered in to an agreement to leave employment with the Apple iPhone and iPad maker, with the understanding that they would receive unemployment pay and benfits.

However, things didn’t go according to plan when Foxconn suddenly decided they would no longer honor the agreement and refused to pay the workers.

The scene prompted the Major of Wuhan himself to arrive and talk the angry mob out of jumping from the factory.

The technicians are now safely off the factory roof and some have even returned to work for Foxconn! The company has yet to make and official statement.

Next Android Basics: How to uninstall and delete Android apps