Beijing isn’t the only city battling with heavy rain and flood streets this week, nearby Tianjin has also suffered, but even with all the destruction and damage one Tianjin resident has managed to have some fun.

While residents of the city scramble for higher ground and expensive luxury cars sit windscreen deep in rain water “motorboat brother” has been piloting his powerful jet-ski through Tianjin’s flooded inner city streets!

Various photos and video (below) have recorded “motorboat” brother cruising down streets which only a few days ago would have been crowded with cars, bicycles and pedestrians!

We’re not sure what Tianjin police make of the performance, but we certainly can’t blame the guy! Who wouldn’t want the chance to go around town of a jet-ski it has to be way cooler than a Ferrari and will likely pick up more ladies than this Chinese made fake Lamborghini! 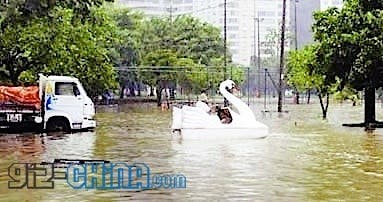 Next Another Xiaomi MI2 Prototype Leaked!