After yesterday’s China Unicom leak, more reports are confirming that Xiaomi will be launching 2 new phones on the 9th April in Beijing.

The second leak comes from China Telecom who confirm that the China Unicom version of the new Xiaomi M2a and M2s will launch on 9th April with China Telecom CDMA versions coming later.

Earlier rumours claim that a new updated version of the Xiaomi Mi2 will launch named the M2s. The updated phone will be physically identical to the current flagship Mi2 but will boast an updated Snapdragon 600 quad-core CPU. The second phone rumoured to launch is the M2a which will replace the M1s as the entry-level phone. The M2s will boast a Mi2 inspired design with square camera surround and slightly larger 4.43-inch display. 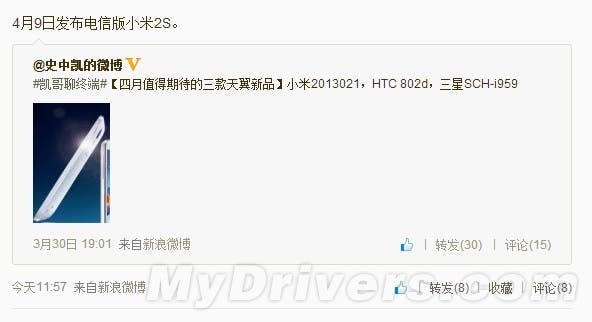 We’ve contact Xiaomi and are waiting to hear back from them for their comments.

Next No.1 Minipad Android iPad clone priced at $160!