The Vivo Xplay 5S is a long time coming so we are all waiting for something really remarkable once the phone finally launches, so how does a SD820 and 6GB RAM sound?

So far there have been 2 Vivo Xplay models. The original Xplay is likely forgotten by many but was one of the first large screen phones and packed impressive hardware for the time. Next it was the Vivo Xplay 3S, which although launched in another time (yes, that’s how long it feels) still manages to keep up with current phones thanks to a 2K display.

The Xplay 5S has been MIA for too long now, but now that the Snapdragon 820 is in production it looks live Vivo are getting their houses in order and preparing to release another flagship monster.

Today Antutu benchmarks from a phone with the model number (PD1516A
) believed to be the Vivo Xplay 5S were published listing the phone as a 5.5-inch devices with 2K display, Snapdragon 820 chipset and 4GB RAM.

Despite the benchmarks Jan Jiutang, a regarded industry analyst in China, posted on Weibo that the Xplay 5S would ship with 6GB RAM. 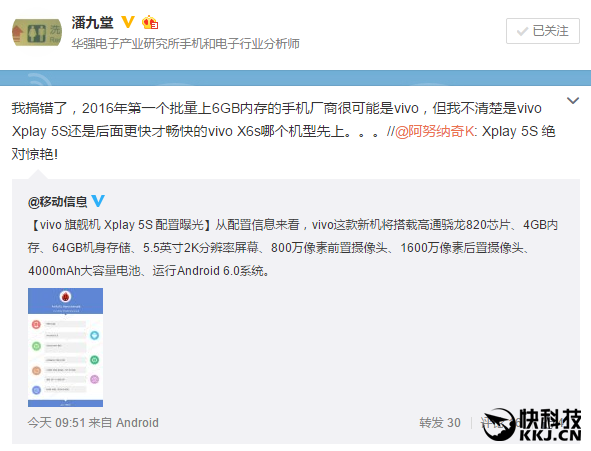 The most obvious possibility here is that there are two versions of the Xplay 5S the 4GB RAM model being the “entry-level” version and a 6GB model for the real hardcore users, but what would we use 6GB RAM for?

Whatever Vivo have in store it sounds like we won’t find out until April when the phone is expected to be announced. It’s believe that the Oppo Find 9 and latest Nubia Z11 phones will make an appearance at around the same time.

Read Also:  What happens to LG Rollable as LG quits the smartphone market?

Previous Jingdong Mall have some great prices on Huawei, Meizu and LeTV phones