Apparently, HMD Global is doing all the necessary preparations to launch the recently released Nokia 3.1 in the Mr.Trump’s President country. The entry-level smartphone was revealed by the Finnish company on late last month, and according to a new leak will soon be available in the U.S through some retailers.

Well at least one retailer, BH&Video confirmed that it will offer the dual-SIM handset and even listed the smartphone on its website, also the retailer attached a $159 price tag on the device. That’s a good value for money considering what the Nokia 3.1 carries hardware and software-wise. 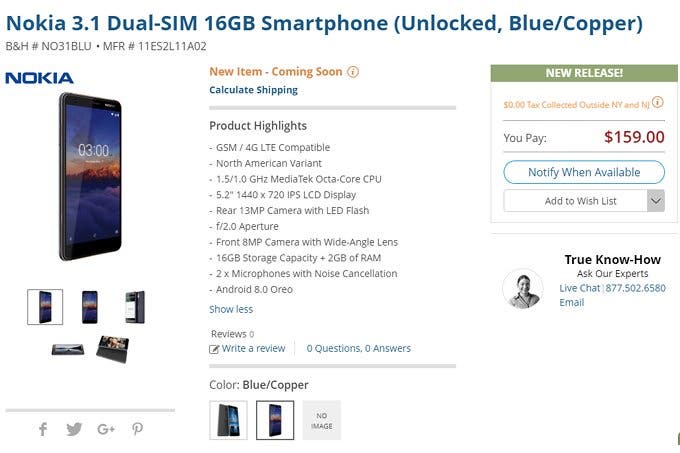 The Nokia 3.1 will be one of the cheapest Android smartphones in the United States to ship with Android 8.0 Oreo on board. Moreover, the smartphone is powered by the MTR6750 octa-core which consists of a 1.5GHz Cortex-A53 Quad-Core cluster coupled with another set of four 1.0GHz Cortex-A53 cores. The processing power will be associated with 2GB of RAM, that is the bare minimum for a pleasant experience the Android’s real multi-tasking. The user will have 16GB of internal storage, but fortunately, the smartphone carries microSD support for a further expansion.

On the camera department, the smartphone carries a 13MP rear main camera and an 8MP front-facing snapper. The Nokia 3.1 features a 5.2-inch display with 1440×720 pixels of resolution and 18:9 aspect ratio. Everything is fueled by a 2,900mAh battery that considering all the specifications can be considered adequate. Despite the support of LTE, the chipset lacks the necessary bands for US 4G, so it will only work through GSM carriers such as AT&T and T-Mobile. Of course, this may be a deal breaker for a lot of potential costumers.

HMD hasn’t disclosed any details about this United States release, but considering that retailers are already listing it, then the launch should be imminent.