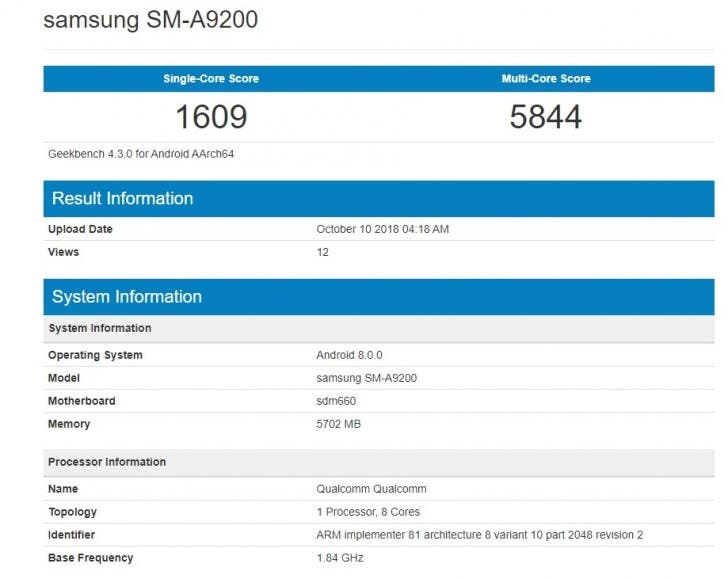 Bearing the SM-A9200 model number, the alleged Galaxy A9(2018) is seen running the Snapdragon 660 SoC paired with 6GB of RAM, which returns 5844 points on the multi-core level, and 1609 on the single core level. Oddly, the listing reveals the device will boot Android Oreo out of the box, even though the latest Android pie has been released for more than a few months ago.

While Samsung is widely rumoured to announce at least a Samsung Galaxy S10 with three rear camera setup later in 2019, the Galaxy A9 2018 might be a very interesting device. Based on previous leaks, the Galaxy A9 is tipped to arrive with a 24MP OIS-enabled f/1.7 main shooter, a 5MP f/2.2 depth sensor for Live Focus effects, an 8MP f/2.4 super-wide angle camera (120-degree field of view), and a 10MP f/2.4 telephoto camera (2x zoom). The device will also feature 6.28-inch AMOLED screen (full HD+), an 8MP f/1.7 selfie camera, a 3,720mAh battery, and USB Type-C connectivity.

It is still not clear if the Samsung phone with SM-A9200 model number is the rumoured Samsung Quad-camera phone slated for October 10 release, however, things should become clearer in about 24hrs from now.

Next Elephone arming up for the HongKong Global Resources Exhibition