After weeks of news and beta updates, we finally have very good news for the owners of the Samsung Galaxy S10. No matter what model of S10 you have, the Android 10 update for the Galaxy S10 is official. Yes, it has already arrived in Germany in a stable version, without betas in between. And now, the OTA update should arrive in the next hours to your device regardless of where you are.

Last week, Samsung released a stable Android 10 update for Galaxy S10 users who participated in the beta program. The update for beta users is rolling out in India, Spain, Germany, Poland, and the UK. Now, the company is releasing stable One UI 2.0 with Android 10 updates for the non-beta users. The firmware version starts with GN7*FXXU3BSKO has started to roll out on Galaxy S10, Galaxy S10+ & Galaxy S10e devices. The new version weighs nearly 2GB in size and seeds the latest Google’s December security patch. 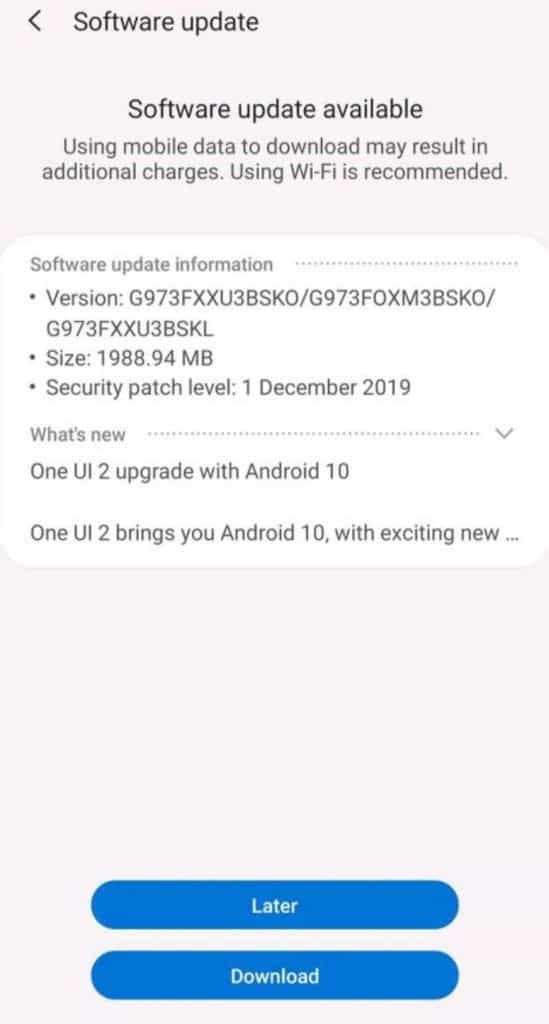 The users who are part of the beta program get a new software version that counts only 140MB in size. But the non-beta users are upgrading it from the Android Pie version so the weight is nearly 2GB in size. Samsung had started beta testing programs in selected countries so there are numbers of users who are still on the Android Pie version. Also, some users didn’t want to participate in the beta program to avoid app crashes and any software issues. Those users can now upgrade to the stable version.

According to TizenHelp, it looks like Samsung has decided to push the new stable version in all the major countries. It is also rolling out in those countries which had not listed in the beta testing program. The stable Android 10 version is now rolling out in India, UAE, Vietnam, Bangladesh, Algeria, UK, Ireland, Spain, Poland & France, and soon we will see it in the other countries. You can manually check for the update by visiting Settings > Software Update.