After long months of waiting, Google finally managed to make the Pixel 4a public. The device was planned for several months before, but due to the ongoing pandemic, the company had to postpone it until August. Not much long after its release, the search giant revealed that there will also be a 5G version of the smartphone and it will be sold as the Pixel 4a 5G. This is a Google Pixel smartphone, and the company is one of the worst companies when it comes to keeping unreleased devices a secret. Based on this, we already have a couple of renders of the 5G smartphone and to anyone’s surprise, it will be very similar to the LTE variant.

The Source of these new CAD-based renders is OnLeaks, this time around he has partnered with 91Mobiles. The Pixel 4a 5G will follow the new design guidelines established by the Pixel 4a and will bring a punch-hole display. Worth noting that even Google Pixel 5 will adopt the same kind of cutout. We can expect this to be used by Google in the next Pixel generations as well, as the company takes its time to leave design languages.

On the back, the phone brings the very same squircle camera housing that debuted with the Pixel 4. It is home to dual cameras and an LED flash. Moreover, there is a fingerprint scanner on the back. This is a curious fact, since the phone sports an OLED panel. Even with the upcoming Pixel, 5 Google doesn’t seem to be bothered by the in-display fingerprint trend. So it is keeping the rear-mounted fingerprint which has been used since the days of Nexus lineup.

The upcoming Pixel 4a 5G display is likely coming with a 6.1 to 6.2-inch diagonal. That probably is the biggest difference between this and the LTE variant which has a 5.81-inch display. The dimensions provided by the leak are 153.9 x 74.0 x 8.6 millimeters. The device is quite thick at 9.5mm, but only when you take the camera bump in consideration.

The Pixel 4a 5G will feature a plastic unibody design with power and volume buttons on the right. Interestingly enough, it has a 3.5mm headphone jack sitting at the top. The bottom is a house for the Type-C port. The renders reveal the black color variant, however, we expect it to come in the white colors as well. 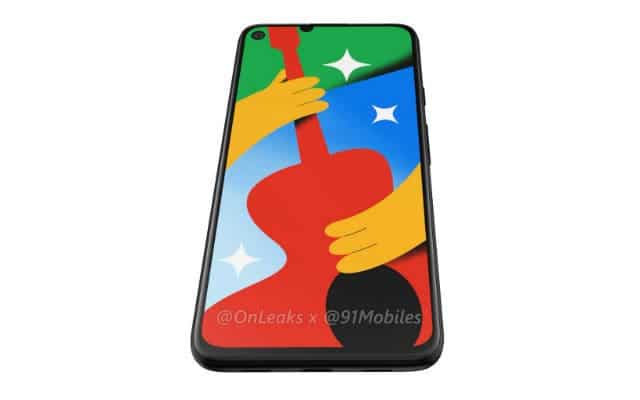 According to recent leaks, Pixel 4a 5G will go official on September 30. Its starting price will be $499. If you’re curious, the 5G powers of the handset will be given by the Snapdragon 765G.

Previous iQOO 5 to go on sale tomorrow, price starts at $578

Next Alleged Huawei Watch Fit gets certified by Bluetooth SIG