Huawei will unveil its latest flagship smartphone series, the Mate 40 series next week. Although the launch is a few days away, a new leak shows the official HD renders and major specs of the Huawei Mate 40 Pro model.

Starting from the display, the leak shows that this device will come with a 6.76-inch OLED display. It comes with a resolution of 2772 x 1344 and a pixel density of 456 PPI. Of course, the display is a super curved screen and it is larger than its predecessor. In addition, the Mate 40 Pro will use a dual punch-hole display, eliminating the notch in its predecessor.

Under the hood, the Huawei Mate 40 Pro comes with a Kirin 9000 SoC. The 5nm chip is an octa-core device with a high-frequency Cortex-A77 core clocking 3.13GHz. It also has three Cortex A77 cores clocking 2.54 GHz and four Cortex-A55 cores clocking 2.04 GHz. In all, the Huawei Kirin 9000 SoC uses eight cores. For its graphics processing, this chip comes with a Mali-G78 GPU. Of course, it integrates a 5G modem.

According to the leak, only the 8GB+256GB UFS 3.1 option will be available in Europe. However, in China, there will be a 12GB RAM variant.

In the camera department, this device will come with triple rear camera setup. All models on the Mate 40 series has a different rear camera design. For the Mate 40 Pro, it has a circular design with the sensors around the circle and the Leica branding in the middle. The main camera is a 50MP f/1.9  sensor. Furthermore, we have a 20MP f/1.8 ultrawide angle camera and a 12MP f/3.4 telephoto zoom camera. The camera configuration supports 8K video recording and 5x optical zoom. Other sensors on the rear are a colour temperature sensor on the top right as well as a LED flash. Upfront, there is a 13MP f/2.4 primary sensor and a 3D sensor on the dual punch-hole opening.

Moving over to the battery, this device will use a 4400 mAh battery that supports 65W fast charging. According to the company, a full charge should take less than an hour. On the software end, this device will run on EMUI 11 on top of Android 10 out of the box. Other features include Wi-Fi 6, NFC, and Bluetooth 5.2. 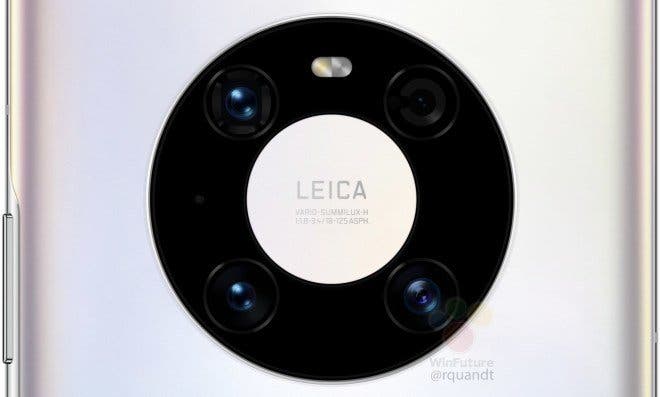 As for its availability, the official launch of this device will take place on October 22, 20 o’clock, Beijing time. It will be available in black and silver in Europe. Other regions like China may have other colour options. As of now, there is no information on the price of the Huawei Mate 40 Pro.