Tecno and Infinix have been raising their efforts since the last year. The former brought a bunch of mid-range smartphones and budget segments in a bid to catch some user base across the globe. The latter is trying to go beyond the mid-range segment teasing revolutionary technologies like 160W fast-charging and more. Apparently, the two Transsion Holdings-owned companies are going a little too far in their own overconfidence. Well, all of sudden, Tecno decided to mock Samsung with its latest Tecno Phantom X promo.

Samsung is well known for mocking other smartphone brands from time and time. In fact, many companies do jokes about their competitors through social media channels. At certain times, we have funny jokes, while others are just bad. We can also list some controversies, like the time when Samsung mocked Apple for leaving the charging adapter behind. A few months after the joke, the company deleted the post and followed the Cupertino-based firm in its charger-less strategy. Today, it’s for Samsung to get a taste of its own venom. 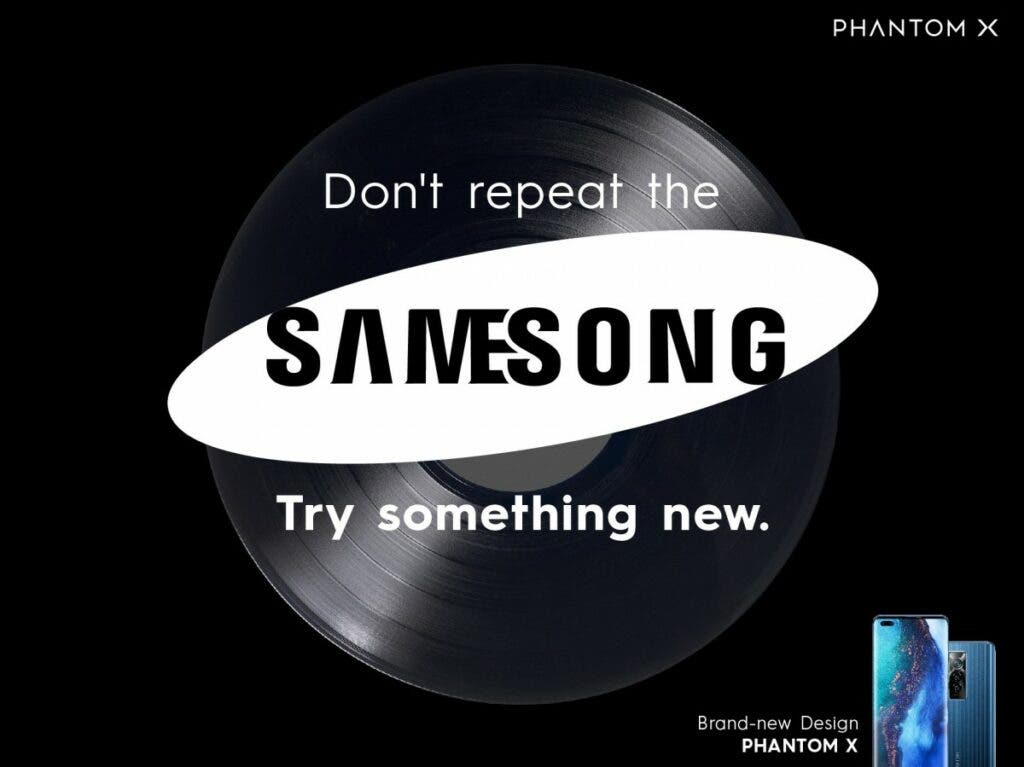 Tecno, as aforementioned, is very popular for its affordable smartphones in developing markets. Curiously, it’s not a big competitor for Samsung, or at least not the one taking the biggest portion of customers out from Samsung. But still, Tecno is calling Samsung to fight with its latest mocking campaign. Tecno’s Twitter account asked its users to “try something new” and not to “repeat the Samesong”. It obviously was a dig at a Samsung. Everything seems to be part of the marketing push for the new Tecno Phantom  X, urging consumers to buy the phone with a “brand-new design”.

Apparently, Tecno is just picking the battle with a giant to make people notice them

It’s pretty crazy when you imagine that Tecno, a brand that two years ago wasn’t very well known for most customers, is picking on Samsung. For starters, Korea is the biggest smartphone maker in the world. We don’t know why exactly Tecno has picked Samsung over many other possible options in the low-cost segment. Anyway, we believe that Samsung will simply ignore this. Curiously, the Tecno Phantom X has a centered vertical camera that quite resembles the Samsung Galaxy S9 series. So in the end, the device’s design isn’t really unique.

Perhaps, this is just a move to grab some attention. Tecno is picking a battle with the big companies hoping that people will take notice of them. Some Samsung fans will certainly notice this, and then, the work will be done.

Next MediaTek also renames the 4nm Dimensity 2000 just like Qualcomm