Samsung is gearing up to introduce its Samsung Galaxy S22 series sometime in the first quarter of 2022. The new devices will bring significant changes in terms of design, specs, and features. The S22 Ultra will be one of the most notable devices since it’s coming to replace the Samsung Galaxy Note series for good. The larger and best-specced device will bring an S Pen slot making it the best “Galaxy Note” smartphone that you could get in 2022. The Galaxy S22 will also be notable upgrades but each one is coming with a specific purpose.

Leaks have been intensifying in the last weeks, and we can say that we already know a lot about what we can expect from these smartphones. As far as the design department is concerned, we already saw these devices through multiple leaked renders. Today, a set of leaked screen protectors is coming to give us the most reliable reference points in terms of scale.

First of all, the screen protectors show super small bezels, so again, Samsung is making its devices even more bezel-less, which is impressive. Also, under-camera enthusiasts will need to wait a bit longer as the three models come with punch-holes. 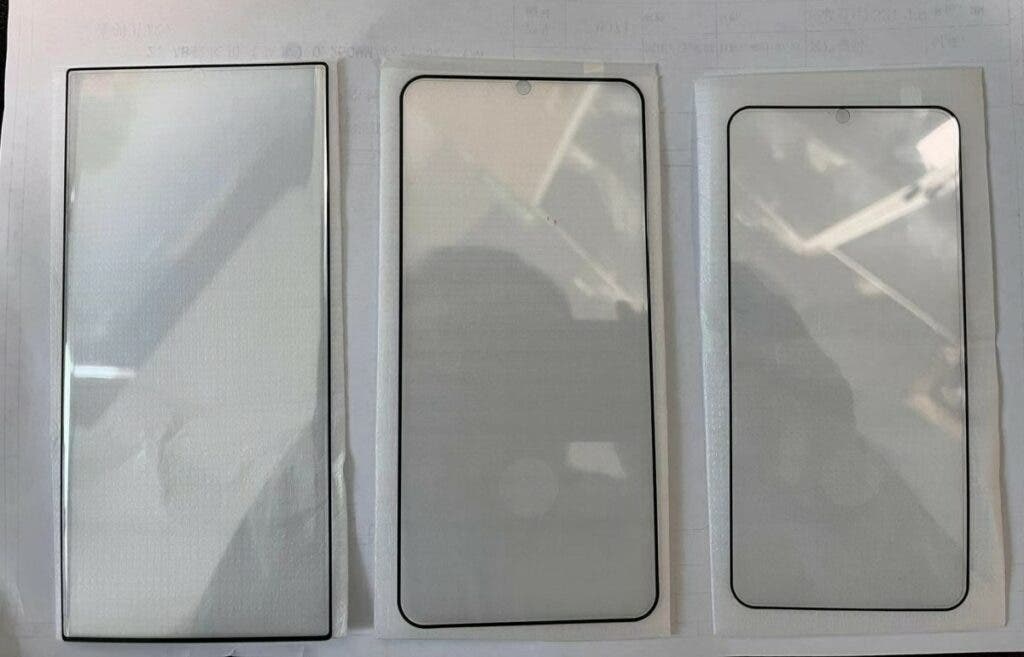 The punch-holes, however, are smaller than what we see on mid-range phones for example. The leak also confirms the vanilla Galaxy S22 and the S22+ will come with flat panels, just like their predecessors. Both models will follow the overall design language of the S21 family closely.

Worth mentioning that this is actually not the first time alleged screen protectors for the S22 and S22+ have leaked. Last time the same source (Ice Universe) also provided the S21 and S21+ protectors. The Samsung Galaxy S22 series will be a bit wider and less “skinny and tall” than the current S21 one with slightly more rounded edges. Admittedly, that’s very hard to judge without a proper side-by-side comparison. According to other sources, the Galaxy S22 will arrive with a 6.06-inch OLED display with Full HD+ resolution. The S22+ will also have its display shrunk to 6.55-inch compared to the 6.67-inch from the processor. Both devices should keep the same camera design language as their predecessors.

The Samsung Galaxy S22+ is the one bringing the biggest changes. Once again, we can see that this device is walking away from being a regular S22 in direction of becoming the new “Note” smartphone. The device has flatter sides and an S Pen slot and both have been long-standing Note characteristics. The device will also have a new “waterdrop” rear camera design without a protruding or island. The screen protector confirms that the device has a large curved display. However, it will be less curved than that on the Galaxy Note 20 Ultra.

Worth mentioning that we still need to take this with a pinch or two of salt. After all, screen protectors aren’t really made to be 1:1 copies of devices’ displays. So, there might be variations in the size of the smartphones and also in the thickness of the bezels.