The first week of January will be quite hectic! We’ll have all the anticipation for the CES 2022 and also a lot of Chinese brands unveiling new flagships. On January 4, Realme will disclose its new flagship series with Realme GT 2 and GT 2 Pro. On January 5, it’ll be iQOO’s turn to reveal its new flagships in the form of iQOO 9 and iQOO 9 Pro. These two devices have been cycling through the rumor mill for quite some time now. Today, we’re getting more details about the iQOO 9 Pro. The high-tier variant will pack a Qualcomm Snapdragon 8 Gen 1 SoC processor and will run Android 12 straight out of the box. 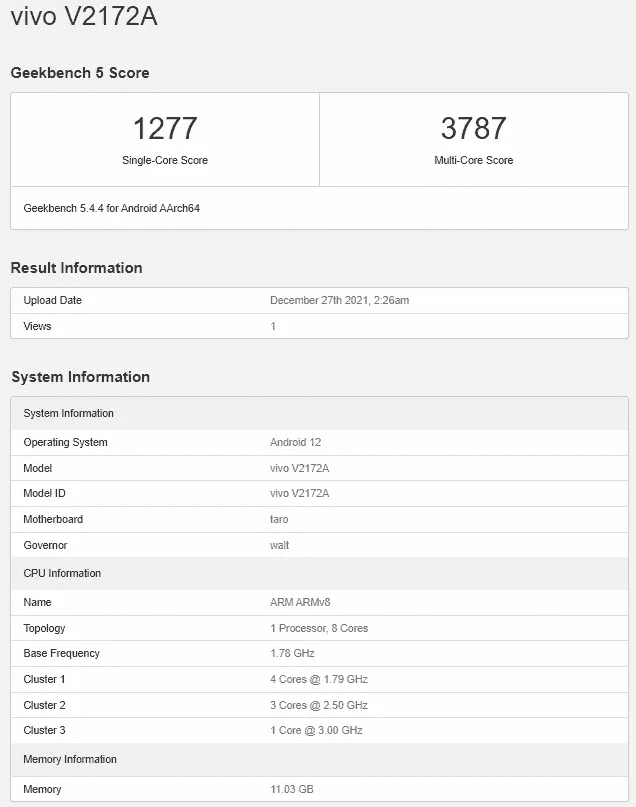 The iQOO 9 Pro appeared on the Geekbench database sporting model number V2172A. The upcoming smartphone has scored 1,277 points in the single-core test in the Geekbench 5 benchmark. When it comes to the multi-core department, the device has achieved an impressive result of 3,787 points. The listing reveals that the iQOO 9 Pro will pack 12 GB of RAM. We expect this variant to come alongside 256 GB of Internal Storage. Since the focus of iQOO is to impress with its specs, then we assume the device will sport cutting-edge LPDDR5 RAM and UFS 3.1 standards.

It’s interesting to see the device running Android 12 in this test. When iQOO launched the iQOO Neo 5 and the Neo 5 SE, we got surprised by the fact that devices came with an Android 11-based version of OriginOS Ocean. The Ocean is the latest iteration of OriginOS, but the new devices still came with the old Android version. Thankfully, that won’t be the case with the new iQOO 9 and 9 Pro. Both smartphones will carry the latest OriginOS Ocean and also the latest Android version.

The smartphone also passed through the Chinese 3C certification website. It shows that it will pack 120 W fast-charging support. Moreover, the device is set to come with a 4,700 mAh battery which should offer a good backup.

Next Xiaomi 12 and 12 Pro had key specifications revealed