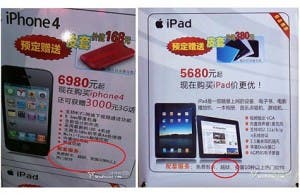 China Unicom and Apple have been partners ever since the iPhone 3G launched in China in March 2009, however they now seem to be in a head to head battle for iPhone 4 sales in China.
The iPhone 4 officially launched on Saturday (25th September) and is available from either China Unicom Stores or Apple stores, the phones are the same Chinese version of the iPhone (they use WAPI WIFI and work on the Chinese 3G network) but have one very big difference.
The Unicom model must be bought with a 2 year contract meaning you would be tied to Unicom for the duration, but Apple are selling the 4 with no strings attached, allowing the customer free to choose what network they want.
What’s more Apple are actually selling the iPhone 4 for around 1000 yuan less than Unicom and have also dropped the price of the iPhone 3GS from 4999 Yuan to 3999 Yuan!
So Apple being very unApple like in the Chinese market! Cheaper pricing and not wanting to be tied to a single carrier! U.S Apple customers stuck on AT&T must be fuming!!