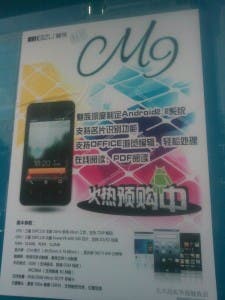 Pre-orders for Meizu’s latest flagship M9 Android smartphone have already surpasses 30,000 units! However, it’s still not been confirmed if the M9 has recieved a license to sell the device, and a firm release date has yet to be set. Jack Wong the CEO of Meizu was quoted as saying the M9 will be avaiable in 4 top tier cities, Beijing, Shanghai, Shenzhen and Guangshou, from the end of the month with the rest of China having to wait for few days for production to catch up with demand, but Chinese media believe it’s more likely the M9 will ship on Christmas Day.

Some more details have also emerged:

The M9 won’t get a camera flash!

Android 2.2 will be installed as standard, but there’s a 2.3 update in the works!

Next Mystery Tablet Gives Us a Quick Flash