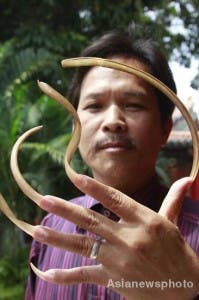 Yup, it’s kind of slow today on the tech front, here’s hoping we come up with another bit of juicy iPhone 5 news like yesterday, but in the meantime….

A man in Hainan (presumably not the same person responsible for the Transformers made of junk) has been in front of the lens today showing off his 15 year labor of love! No, he hasn’t rebuilt a classic sports car, or built himself some odd home made vehicle! No, this fellow has spent the past 15 years growing his fingernails!

Mr Feng, the ‘grower’ of the Wolverine like claws said he had planned to apply for a Guinness World record (in perseverance?) but decided to shelve that plan after breaking his fingernails a couple of times.

The longest of Feng’s nails measures a lethally long 20cm! And grows in a ‘spiral’ shape!

Cool or gross you decide!

Next Smart Covers For Original iPad