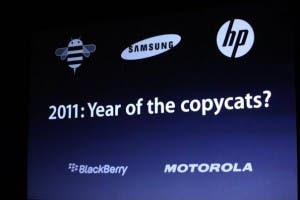 In what looks at first glimpse like the world biggest case of ‘biting the hand that feeds you’ Apple have reportedly started legal action against Samsung over undisclosed trademark and patent infringements connected with the Korean companies top of the range smart phone and tablet line.

Those of you who follow Apple will no doubt know that Samsung actually make the A4 and A5 processors that power the iPad, iPad 2, iPhone 4 and probably iPhone 5, however this doesn’t seem it will be the case for much longer as Apple have also announced that Taiwan Semiconductor Manufacturing Co. will be taking over CPU supply duties.

At the iPad 2 launch Steve Jobs openly mocked Samsung and their ‘copycat’ tablets.