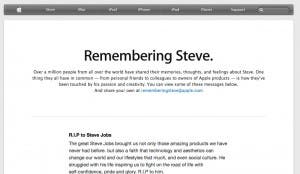 Since the untimely death of Steve Jobs just over 2 weeks ago, Apple have been collecting messages from Apple fans and Steve Jobs admires through the email rememberingsteve@apple.com.

Apple have now created a scrolling tribute to Steve Jobs where visitors can read the moving and heart warming messages from people around the world.

The page and messages can be seen at apple.com/stevejobs and you can still send a message if you haven’t already.

Read more about Steve Jobs, his life work and Apple after the jump.

Steve Jobs started his technological expertise, first, by learning basic electronic make-up from his adopted father Paul Jobs. Once graduated from high school, Jobs attended Reed College in Portland, Oregon to which he dropped out after only one semester. Though he never earned a degree, Jobs continued learning by auditing certain classes on campus. During this stage in Jobs life, he had very little income, and very often found himself eating free meals at the town’s Hare Krishna temple. During this time, Jobs was fascinated with Eastern Mysticism and a deeper understanding of life to which he took a trip to India (using money from his later job with Atari) and also experimented with LSD. Though a tough couple years, Jobs managed to learn enough to land his first career pursuing job as a technician for Atari.

Jobs career at Atari was short lived, however, for less than two years later, Jobs and his friend Steve Wozniak founded Apple Inc. Steve Wozniak had been Jobs’ friend since he was sixteen, and although Jobs did not have as much technological expertise as Wozniak, Jobs held the business skills side of a computer Wozniak would build thus igniting the fire to make what Apple is today. Soon after making the first Apple computer, Wozniak vamped up with the Apple II, which was a revolutionary success. With its cutting edge technology, Jobs was able to convince Mike Markkula, A previous Intel executive, to invest $250,000 dollars into the small company. Within four quick years, Steve Jobs and Apple was worth over 200 million dollars.

After Apple’s big hit of the Apple II, the next few projects turned out to be duds. The Apple III, The Lisa computer, and the first Macintosh, all turned out failures. With this and Jobs rising temper, he was removed from CEO of Apple. Jobs disagreed with their decision, but did not fight. Instead, jobs invested 10 million into a group of graphic experts which would become Pixar. Pixar had no lasting accomplishments and almost failed, but finally made it big with their movie “Toy Story” which came out in 1995. With this massive accomplishment, Jobs made more than 1.5 billion dollars.

During this same time, Jobs created a new experiment known as the “NeXT Computers”. Jobs put everything he could into this new computer and business, making it one of the most advanced computers of all time. Unfortunately, due to bad business marketing and a few critical mistakes in the computer, it turned out a losing investment. Even with the NeXTstep, a remake of the original, the Next corporation seemed a failure. Not only was Next on a losing track, but so was Apple. The once glorious company was now facing a struggle to hold a known position with its other competitors quickly stomping them out. In a last effort attempt, Apple bought out NeXTstep and Steve Jobs was once again reunited with his first company.

Jobs brought to apple the NeXTstep interface, while apple incorporated it into the easy to use macintosh layout. This new operating system, known as Mac OS X, created a computer unlike any other and was a instant success, putting apple back on top. This new computer was one of the first personal computers that started the trend of in-home computers. Also with this computer came Iapps such as Imovie, Itunes, Iphoto, etc. These new “apps” grasped the aspect of usability with ease. When technology seemed to reach it’s peak in 2000, Jobs continued Apple’s undisputed success with a new project known as the Ipod.

The iPod, released in 2001, was the first generation of the most successful project Jobs would ever make. This new, portable, music player was raved over. They were slick, fast, and were very easy to understand and sync to Itunes so that a user could easily transfer their music to the mini machine. The profound success of the iPod led to the iPod mini in 2004, iPod shuffle, and iPod nano in 2005. To which many more versions and upgrades would continue the iPod buzz even to this day. Today, it is actually hard to find some one who doesn’t have an iPod.

Steve Jobs continued apple’s success with the development of new computers, newer iPods, and unheard of releases of gadgets known as the iPad, iPhone, and macintosh laptops. These revolutionary technologies took over the marketplace giving Apple the success to challenge even the largest companies. Jobs continued this great success until he slowed down due to pancreatic cancer. He died October 5, 2011. Jobs was an innovator unlike anyone else. He brought to the table a creativity and passion that left lasting impacts on almost every aspect in the tech world. With these lasting impacts on our world, Steve Jobs will never be forgotten.