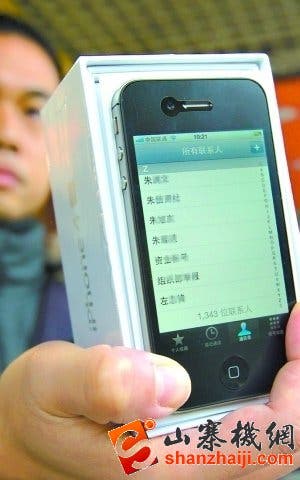 Apple are in trouble again in China for reportedly selling pre-owned iPhone 4S to customers at full price without warning them!

The report comes after an Apple customer named Yang in China, bought a ‘new’ iPhone 4S from an Apple store after queing for hours.

Mr Yang claims after buying his iPhone 4S he hadn’t the time to open the box and set it up, but when he finally did 2 days later, he found his new iPhone 4s already contained more than 1400 contact details from a previous owner!

Obviously he is pretty pissed! Not only did he have to wait in line for hours being jostled by scalpers to get his hands on the latest Apple iPhone, but he also paid close to 6000 Yuan for the iPhone 4S which converts to roughly $950 USD!

This is not the first time such reports have been heard, as during China’s iPhone 4 launch last year, a number of unhappy customers found that their, supposedly new iPhone’s were in fact reconditioned units sold on at full price!