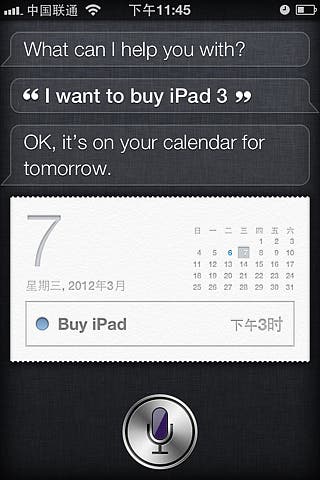 Siri is a very useful feature one which I wish was fully operational here in China so I can upgrade to the iPhone 4S (my wife and bank manager both thank you for not working properly Siri). Now it seems Apple’s talkative assistant is even answering questions about the iPad 3!

Someone over at the popular Weiphone, Chinese iPhone and iPad website, asked Siri when they could buy an iPad 3, and she apparently answered!

Siri’s response (seen in the screen shot above) is that we can buy an iPad 3 on the 7th of March! Apparently Siri answers the same if you ask  questions about the iPad 2S or iPad HD, iPad HD being the favorite for the new iPad’s name.

As we don’t have an iPhone 4S to try this on (sniff) we don’t know if this is actually a real screen shot to the question “when can I buy an iPad 3/HD”, if this could be just a screen shot of someone making an appointment through Siri, or it’s Photoshop!

Either way I don’t really care as the 7th is almost over for us in China, and I don’t have a new iPad 3, but more importantly I did a spot of time traveling earlier today and have seen the new iPad HD and listened to Tim Cook’s iPad 2s introduction and Keynote so there!

Previous This Android Tablet Looks Like a Purse Or Possibly Murse