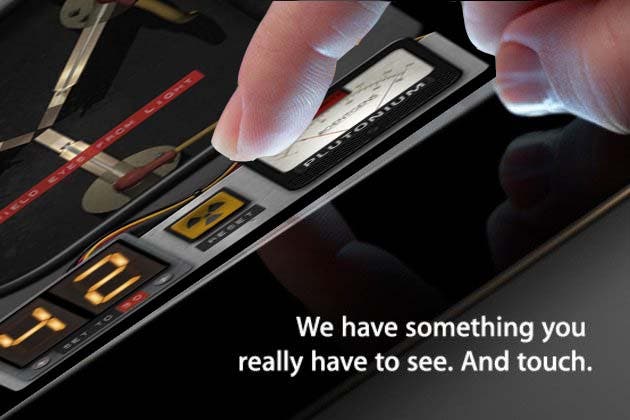 Wow what a great keynote! Possibly the best keynote ever! and that new iPad from Apple that is some magical device! But hang on one app farting second!

You may all be wondering what cheap stunt we’re trying to pull. Yes, we know that the new iPad won’t be unveiled by Tim Cook for another few hours, and you are all waiting to see the new iOS tablet, but we’ve already seen it!

You see while you have all been watching animated Gif’s of cats, we were busy building a time machine! Yeah, that’s right! A time machine, out of a Delorean!
So I have seen the new iPad, the iPad HD, and I know all about the great new Apple tablet, and I’m going to share what I remember (I have time travelers amnesia you see) with you all now!

So what I can remember of the iPad 3 Keynote? 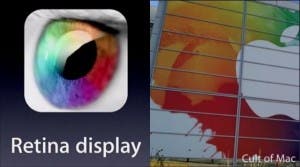 The new iPad which will be launched later today has a brand spanking new Retina display. Actually most of you should already be well aware of the new screen with 4 x the pixels as it has been one of the most talked about features of the iPad 3 (iPad 2S).

Actually Apple are even showing the iPad’s new Retina display off on the posters outside the Yerba Buena Center for the Arts in San Francisco.

Yes, Apple have finally upped the RAM on the iPad from 512mb to a full 1GB RAM, but again you should all be well aware of this by now as this was actually leaked in an iPad 3 debugging screen shot at the beginning of February! 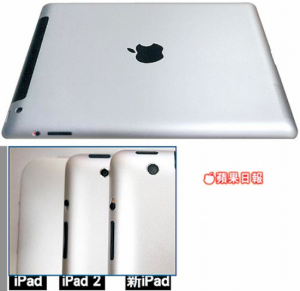 iPad 3 has a thicker body

Apple are usually known for making their products thinner as the evolve. The iPod, Macbook Air and iPhone 4 are all evidence of this.
The iPad 3 is 1mm thicker, but this is to fit in all the Retina Display goodness and larger battery!

Yup, I also recall that the iPad HD will go on sale next week! Friday March 16th to be exact!

What I can’t remember from the iPad 3 Keynote

I can’t remember if the iPad 2S has a 5 mega pixel or 8 mega pixel rear camera, but I’m sure it’s better than the crappy camera found on your times current iPad 2!

This is another element of the iPad 3 which time amnesia has stolen from me. Was it a souped up dual core Apple A5X CPU Tim was showing off on stage, or a great new Apple A6 quad core? I’m sure I’ll remember in a few hours 🙂

Well there you have it! The iPad 3 (2S) HD is a great new tablet from Apple and I’m glad I built a time machine to see it, but don’t worry as the rest of you only need to wait until 10AM PST on Wednesday, March 7th to see the new Apple tablet in action!

Next This Android Tablet Looks Like a Purse Or Possibly Murse