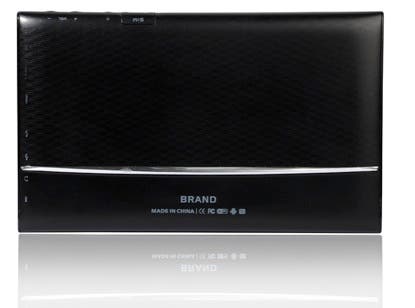 I’m not all that hip and trendy, but I do feel like I have just created the word murse by fusing the nouns man and nurse! Please feel free to let me know if I’m wrong. In other news A Tablet That Looks Like a Purse!

Not only does this Allwinner A10 touting tablet look like cheap leather purse with silver trim, but it get’s an awesome logo too! “BRAND” if only it had “YOUR BRAND HERE”…

Ah well we can’t have everything, but in the case of this Purselet (yes, I’m fusing again) the Chinese factory behind it sure have stuffed a mighty fine specification.

As mentioned above an Allwinner A10 CPU runs the show, and quite briskly we imagine as it is running at a nice 1.5Ghz. There’s also a Mali-400 GPU on board, plus 512mb RAM.

Android 4.0 comes as standard and can be interfered with for up to 6 hours through the 5 point multi-touch capacitive screen.