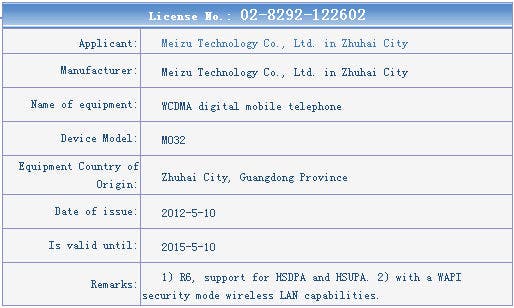 The Meizu ‘Dream’ phone the dual core MX has been on sale for around 5 months now, but what fans have been really looking forward to is the Quad Core Meizu MX Android smartphone which could be on sale very soon!A recent network approval which has been filed at the China’s telecom commission could hint at the imminent launch of the next Meizu MX,

The device in the listing is named the “MO32” which has had Meizu fans wonder if this could be the Quad Core MX gaining it’s network license.

If this is the case the Meizu MX could be on sale as earlier as next month and will go up against the Samsung Galaxy S3 which also arrives next month.