The Chinese New Year holiday and factories are celebration by leaking photos of their new wares! The latest leak comes from Neo and involves the quad-core Neo N003! More photos after the break.

The quad-core MT6589 equipped Neo Rio N003 will feature a 5.3-inch display and should go on sale at around the same time as the smaller Neo N003S which is rumoured to sport a 4.7-inch display.

The photos here are of the N003 alongside the current N002 to give us some idea of the size (the N002 is a 4.5-inch screen). While the images don’t really spill the beans on the new phone it does show that the N003 is nearing production and could go on sale not long after the Chinese New Year. 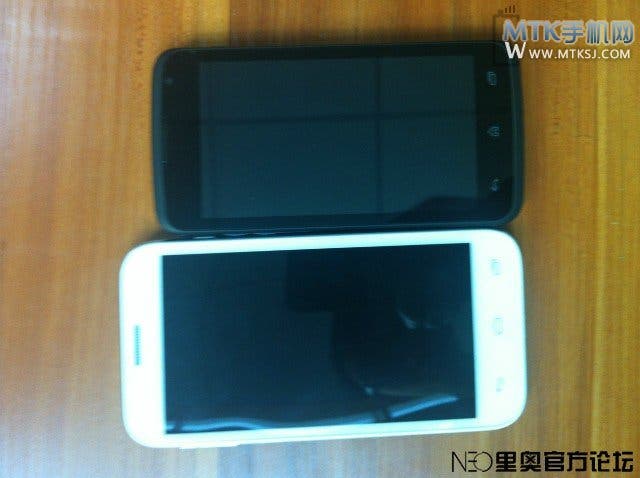 Something which does stand out is the bent reflection of the overhead lighting in the comparison photo. Is this just dodgy reflection, or does the N003 feature a slightly curved screen similar to the one found on the HTC One X?

As for hardware, we are hearing much of the same from Neo as JiaYu and Umi, so expect the N003 to come with 2GB RAM, 32GB of built-in memory, a 13 mega-pixel rear camera and Android 4.1 Jelly Bean.