UMi’s marketing machine is on the push, but it’s the quad-core UMi X1s the company are promoting rather than the flagship UMi X2, however with benchmarks this good and at this price many customers might choose the X1s instead!

We knew that UMi were planning a quad-core version of the UMi X1s but it’s only been the last few days we have seen serious promotion of the device. The X1S comes in the same 8.9mm thick body as the original dual-core version, but pack a couple of notable updates.

The first update, and the one which UMi are concentrating the most, is the MT6589 quad-core processor which runs at 1.2Ghz. The dual-core X1 was no slouch, but with a quad-core on board and just a 720p display to drive we can expect blazing performance! In fact we don’t have to wait as Antutu benchmarks for the quad-core UMi X1S have already been posted with an impressive score of 12,600! 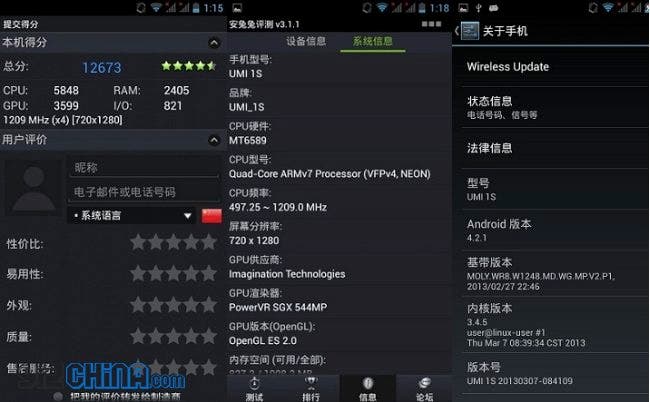 The next update is the use of Android 4.2.1 Jelly Bean on the X1s which is going to bring some great enhancements to the phone including the improved 4.2 camera interface and keyboard along with Miracast!

Finally, and possibly the most important improvement is the use of Corning Gorilla Glass in the 4.7-inch display. The original UMi X1 featured Japanese Dragontail hardened glass which actually broke all to easily. Gorilla Glass 2 should improve the durability of the phone.

According to UMi the X1s is ready and waiting to launch, and with a retail price of just 999 Yuan ($160) we imagine many customers might postpone their UMi x2 purchases in favour of this feature packed, wallet friendly beast!