This afternoon Green Orange launched the N1 at the Mercedes-Benz Center in Shanghai. No surprise there, but what has come of a bit of a shock is that 3 variants of the Green Orange N1 were announced with the flagship model sporting a 1080 display and 2GB RAM!

The N1 Beauty is the entry-level version of the phone and costs 1399 Yuan ($227). The 6.98mm body is the same on this version as on the more expensive versions but to keep the price competition a 1.2Hhz MT6589 quad-core processor with 1GB RAM and 5-inch 720p display come as standard as well as an impressive 5 mega-pixel front and 13 mega-pixel rear camera.

The top of the range N1 was announced today, but isn’t yet available to buy just yet, but the wait might be worth it! Like the Speed model a 1.5Ghz quad-core MT6589T chip and 2GB RAM are in place however the 5-inch 720p panel has been updated to a FHD 1080 display. The front camera has also been updated and is a 8 mega-pixel sensor on the Super, the rear is 13MP like the others! The Green Orange N1 Super will cost 2199 Yuan ($358). 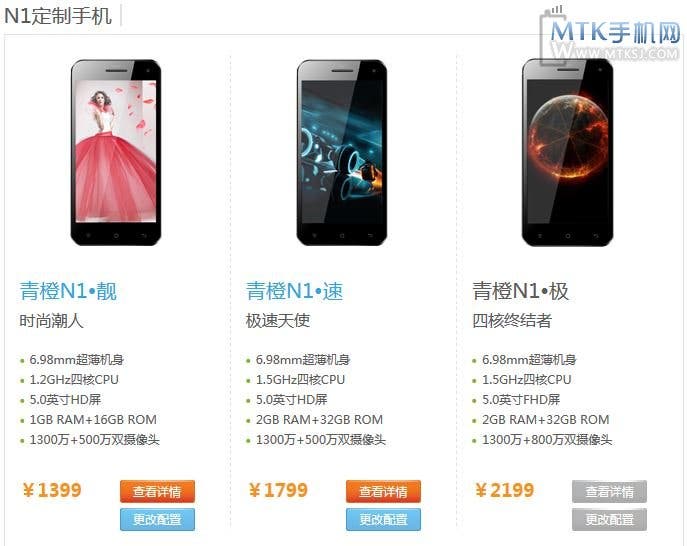 Not content with giving us a choice of 3 great phones, Green Orange are also offering the N1 in a rainbow of colours which give the phone a colourful retro iPhone look. Other great features include 2.95mm screen bezels, LED flash, GPS WiFi and Android 4.2 Jelly Bean OS.

Next The Oppo Ulike 2S is a self portrait machine!