The Elephone P6 is yet another 6.3-inch Android smartphone, but some clever specification choices, excelling pricing and nice attention to detail (in certain areas) make for a surprising package.

When we first heard of Elephone we really didn’t know what to expect. We have seen plenty of Chinese phone brands come and go over the past few years and sometimes it is difficult to imagine there is room for yet another brand in this already highly competitive market! Still Elephone are here and they have a single phone in their lineup (another is on the way), and we’ve spent some time testing it.

Elephone P6: What’s in the box?

Our review Elephone P6 arrived in a standard cardboard box with plenty of bubble wrap stuffed inside. Under all those protective layers we found the Elephone P6’s packaging with wood looking pattern and a similar Samsung style to it. 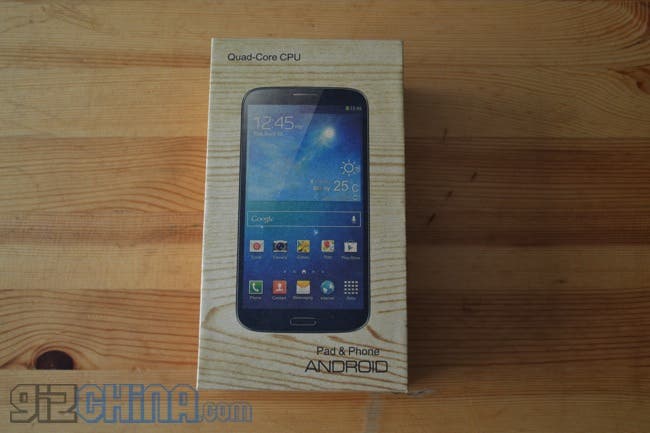 The packaging is generic and identifies the P6 simply as an ‘Android Pad Phone’ with the rear detailing some of the specification including dual-sim stand-by, 6.3-inch display, 1.5Ghz quad-core processor, and other details. 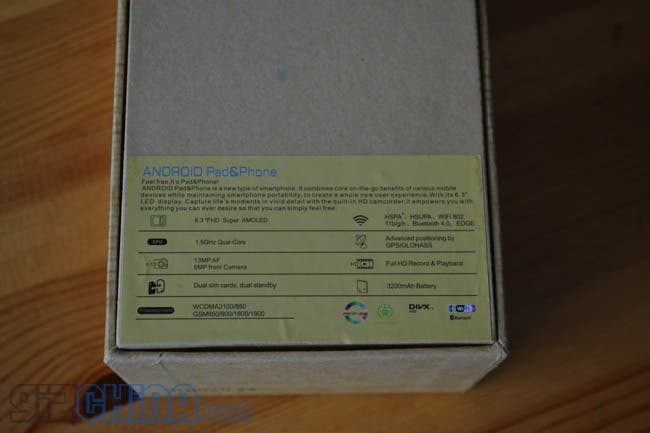 It’s worth noting at this point that the specifications printed on the box do not match what the phone actually has. The display for example is not a FHD AMOLED unit, the rear camera is not a 13 mega-pixel and the battery is a 3000mAh unit not 3200mAh (or 4200mAh as the label on the batteries claim). It is also worth noting that Elephone have been honest with the specifications and everything they told us about the phone matches the specs they sent over to us, leading us to believe that this isn’t the actual packing the phone will ship in once it launches. 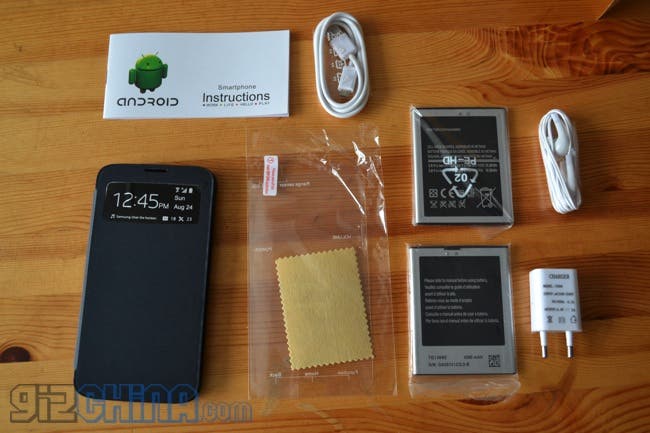 So ignoring what the packaging says let’s take a look at the contents. 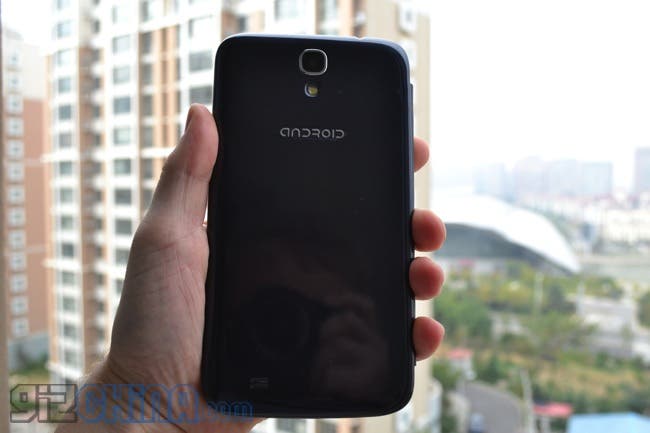 The Elephone P6 we were shipped is a dark blue version with Elephone branding on the standard rear shell and generic Android branding on the flip cover. There will also be a white version of the phone on sale too. 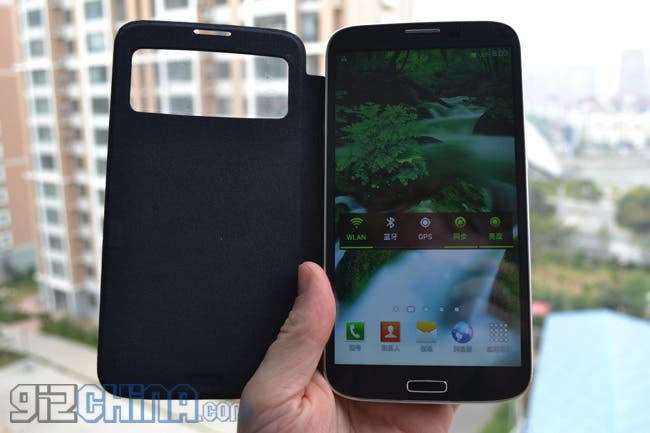 Many Chinese phone companies offer their phones in 2 versions, a standard model with 1GB RAM and 16GB memory and an ‘Advanced’ version with 2GB RAM and 32GB memory. For our review we received the standard model, and have found it to run remarkably well, it is partly due to the 1.5Ghz MT6589T processor and partly to do with the display having a resolution of 1280 x 720 rather.

With a screen size of 6.3-inches the Elephone is a large device, but it doesn’t feel overly big and is quite easy to handle. The bezels on either side of the screen measure in at 3mm which helps keep the overall width to 87mm, which the length is 168mm according to my tape measure. 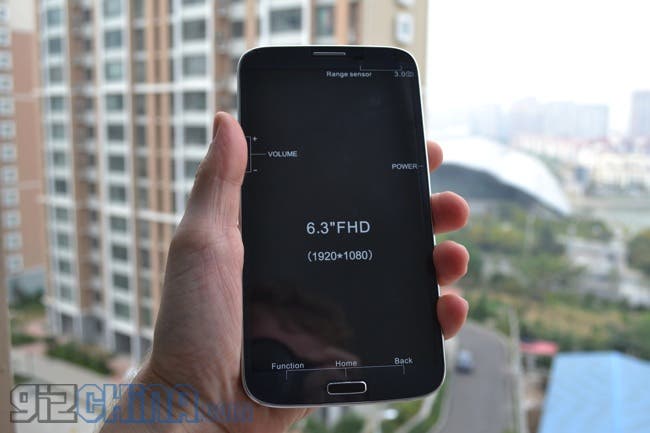 It isn’t a thin phone either at 11mm with the flip cover on, but either I am finally getting used to large phones or the size of P6 just isn’t all that big as I felt fine using it.

The blue face and removable rear are separated with a thick silver band running the entire outside of the phone. The screen side edge of this band is made of metal to help protect the display from knocks and drops, the rest is just silver coloured plastic. 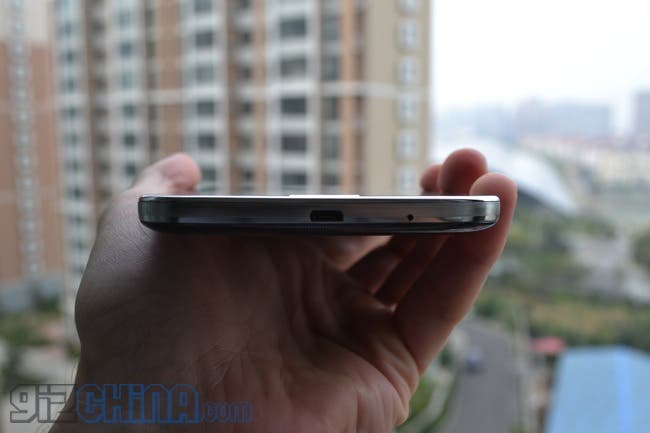 Turning the phone around along it’s edges we can find a 3.5mm headphone jack at the very top. Micro USB plug in the bottom directly in line with the physical home button.

A power switch is in thumbs reach (if using right-handed) and a volume rocker is located on the left. This is one of my only niggles about the design of the phone, when using the P6 with the supplied flip cover it is rather inconvenient to get at the volume rocker, it would really have been better if it was located on the right with the power button. 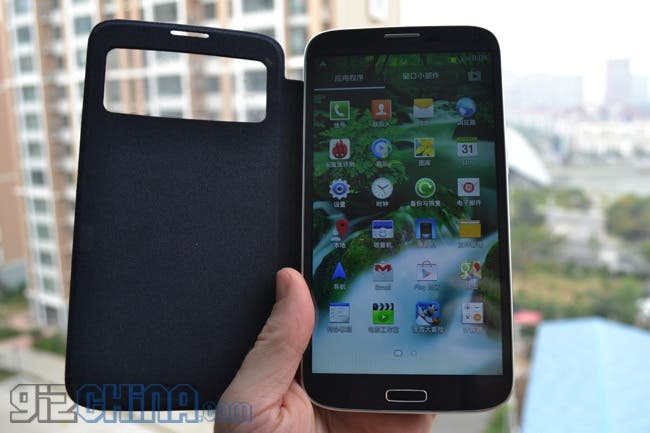 The face of the phone is obviously were we find the display, we call have a physical home button, straddled either side by capacitive menu and option buttons which are backlit but do bleed a lot of light. At the top we have a speaker, front 2.2 mega-pixel camera plus light and proximity sensors. 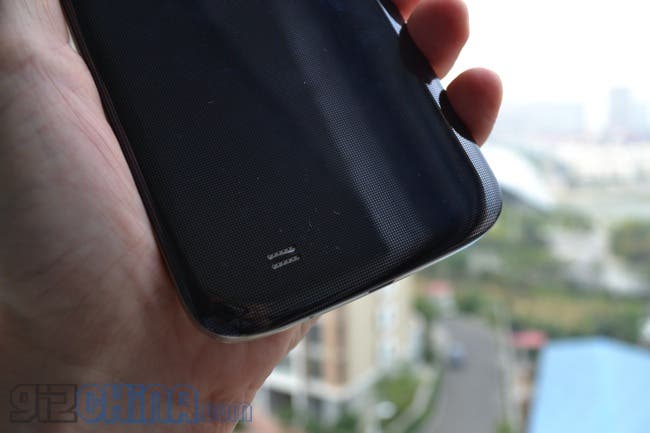 Turning to the rear we have an 8 mega-pixel rear camera, LED flash and external speaker hole. 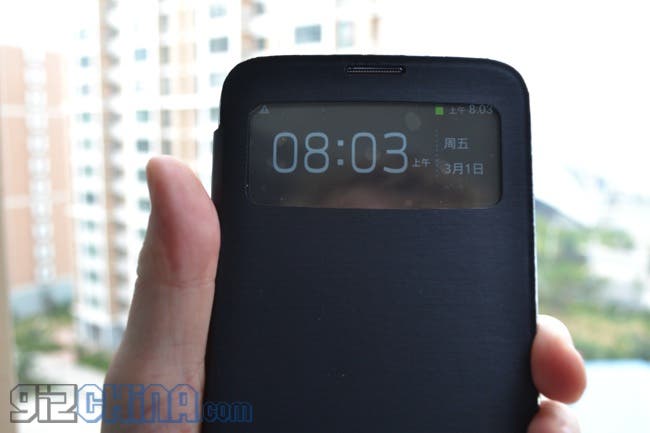 A popular feature for Chinese phones is to have support of air gestures. The P6 is no different, waving your hand in from of the sensors above the display lets you sweep from screen to screen in your app draw, picture to picture in the gallery and pause music in the MP3 player.

The video below shows the air gestures in action.

With just a 720p display to power the 1.5Ghz MT6589T processor and 1GB RAM prove to handles most things quite well.

Obviously swiping from screen to screen, browsing the web answering emails etc are all handled with grace. Even running my Riptide GP2 is handles well with no notable slowing and smooth game play. However, if the onscreen action does get a little hectic there is some slowing.

As usually we ran a number of benchmarks on the Elephone P6, and again due to the lower 720p resolution the P6 scored surprisingly well. 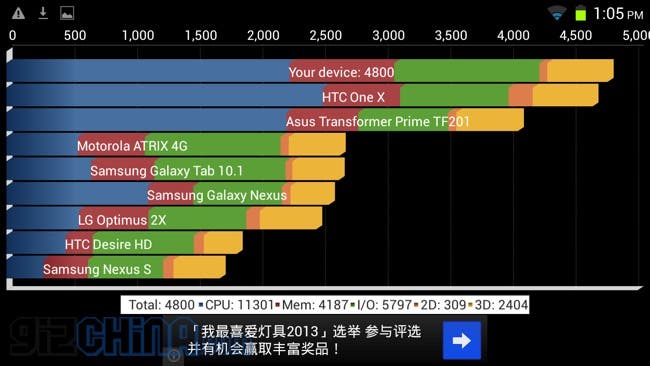 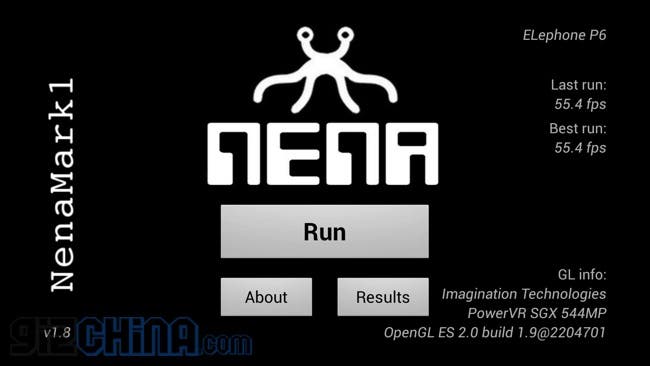 We ran Nenarmark to achieve an average frame rate of 55.4fps. 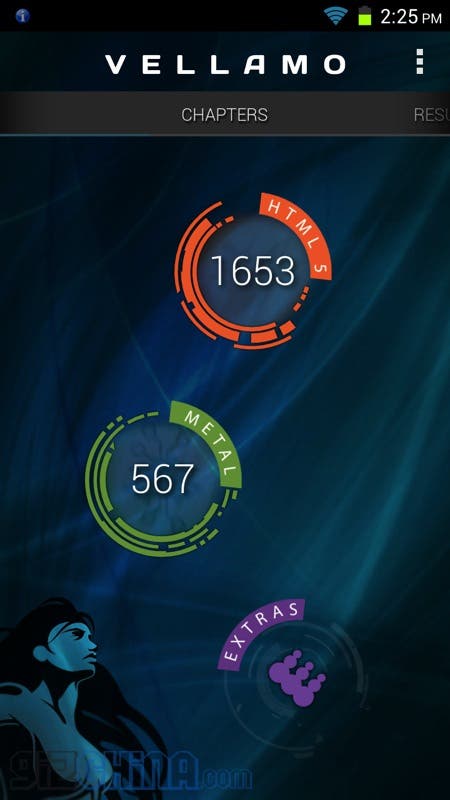 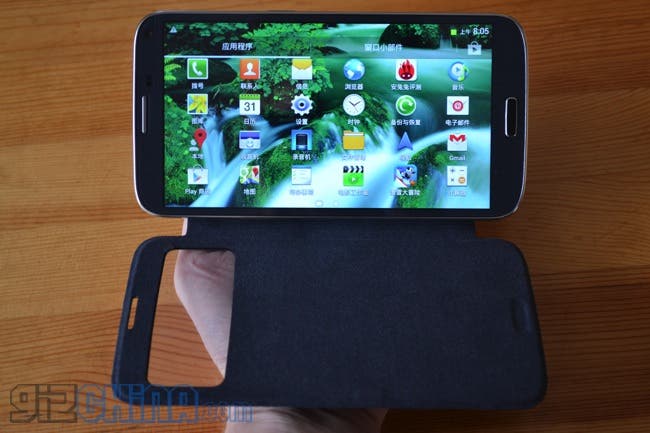 After testing a number of 1920 x 1080 phones, the last being the 6-inch Zopo Captain S and its beautiful display, I was a little worried that the 1280 x 720 resolution on the 6.3-inch Elephone would look outdated with a wash of pixels. 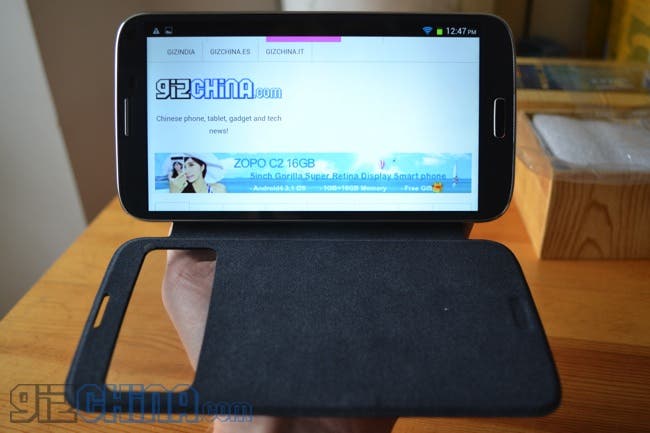 In truth I personally find the display to be fine. No it doesn’t have the same crisp, sharp images as the Captain S, or any other 1080 phone for that matter, and text isn’t quite as nice to look at, but when all is said and done it works fine and would certainly wouldn’t be a deal breaker for me at least.

As you would expect the Elephone P6 has all the connectivity options any smartphone of this day and age has including dual-sim, WIFI,A-GPS, GPS, Glonass and Bluetooth and as expected everything worked right out of the box including GPS!

This is the first time I have received a Mediatek powered Chinese phone with fast working GPS right out of the box. Not fix or hack was needed and although some days were cloudy the GPS locked on in a short time and stayed connected! 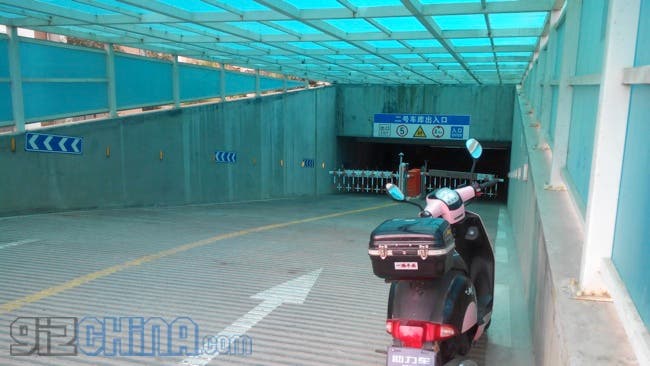 In normal daylight conditions the camera on the P6 is impressive. Not only is it fast to start-up, focus and save images, but the photos is captures are way above what I expected from a phone of this price especially one with so many other great points and features.

When light is limited though the sensor finds it difficult to capture could light quickly. Low light images are also quite noisy the LED flash on the phone isn’t all that useful.

Video captured on the P6 is also surprisingly good. Quality is on par with similar phones and the camera software behaves itself well without continually hunting around for focus. 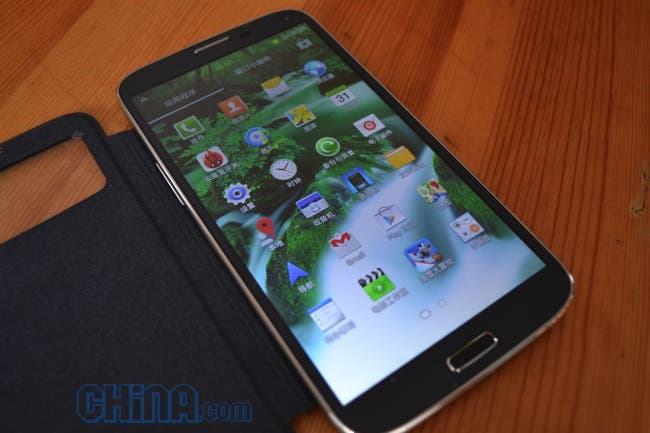 The version of the P6 which Elephone sent us for review costs just $179.99, for that you get a 6.3-inch phone with great performance, nice features such as air gesture control, a smart cover with notification window, surprisingly good camera, working GPS! not to mention a spare battery and the other included accessories!

We do have a few issues such as the misleading packaging and labels on the batteries (but to confirm the specs the phone has are the ones Elephone told us it would) and the placement of the volume rocker, but those are hardly issues which would prevent us from recommending the phone. 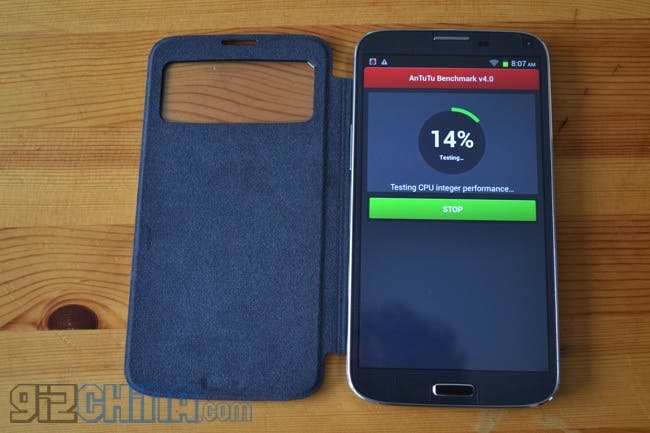 At this price the Elephone P6 is the best Chinese phablet with quad-core Mediatek processor you can currently buy, and it is not far behind devices which cost considerably more!

After testing the Elephone P6, and knowing what the company have planned for their next launch, Elephone are going to be a brand to keep your eyes on!

Next OmniROM - A new, 'open' custom ROM for Android devices!