With the recent confirmation that Oppo will be launching the Oppo Find 7 soon, there has been some speculation about the screen size.

After the launch of the rather large. 5.9-inch Oppo N1, many Ofans and industry followers have speculated that the Oppo Find 7 might follow in the large screen footsteps. Some even suggesting the ‘7’ in the new flagship phones name hinting at screen size of either 5.7-inch to 7-inch!

As they did with bogus Oppo N1 rumours, Oppo have come forward to give fans some facts. According to a Google+ post by Oppo Director, Carl Pei, the Find 7 won’t have either a 5.7-inch or 7-inch display: 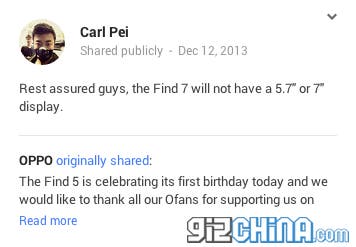 This coincides with my own Oppo Find 7 predictions where I write the new phone will likely have a display size of between 5-5.5-inch.

We still have some time to go before the Oppo Find 7 is released, what killer features do you think it will have?

Hat tip to Mario at GizChina.it for the tip.