MMXNewscaster is at it again. After reporting an Android v4.4 KitKat upgrade for Micromax phones that might be in the works, the leakster has now hinted at an octa-core smartphone from the company.

The device in question, the Micromax A350, was spotted on the AnTuTu Benchmark database. It scored 26,886 AnTuTu points, which is very much in the range of an MT6592 as we have seen previously. Among other specifications, the device is expected to feature a 5-inch or greater full HD screen, 2GB of RAM, a 16 mega-pixel camera and Android v4.2. Given the A350 does launch with an octa-core MT6592, it will find itself in the league of devices like the Intex Aqua Octa and Gionee Elife E7 mini, which sport octa-core processors and are already on sale in the country. 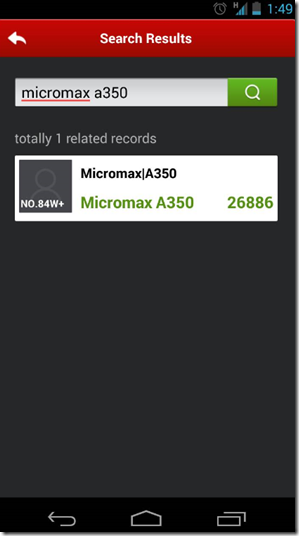 The device will most likely feature in and take charge of the Canvas lineup of phones. If that does happen, there’s a big chance that it gets a ‘Canvas 5’ title, succeeding the Canvas 4 (and Canvas Turbo) which was launched a few months back. According to MMXNewsCaster, the device will be launched in partnership with domestic carrier Tata DoCoMo, giving buyers added benefits like free 3G data and voice calling.