There has been a lot of chatter in China about IUNI, a new custom Android ROM which threatens to take on Xiaomi in both the software and hardware space.

Custom ROMs are becoming more popular than ever in China, MIUI is one of the more famous, but there are also Oppo’s ColorOS, Meizu’s Flyme, LEWA, Aliyun and of course the ever present Cyanogenmod and that’s not including what ZTE, Huawei, Gionee and others are offering!

Now there is a new name to add to the list, and they won’t only be taking on rivals on the os side of things but also on the hardware front.

IUNI os is a new custom ROM which is based on Android 4.3 is slowly making its way on to phones in China including various Samsung models. Not content with just porting their ROM over to other companies phones, IUNI have just put their phone phone through it’s Tenaa Network licensing.

From what we can see the IUNI U2 phone has been designed so that it isn’t too large and can be easily handled with just one hand. Screen size is just 4.7-inch and boasts narrow bezels to keep the width down even further. 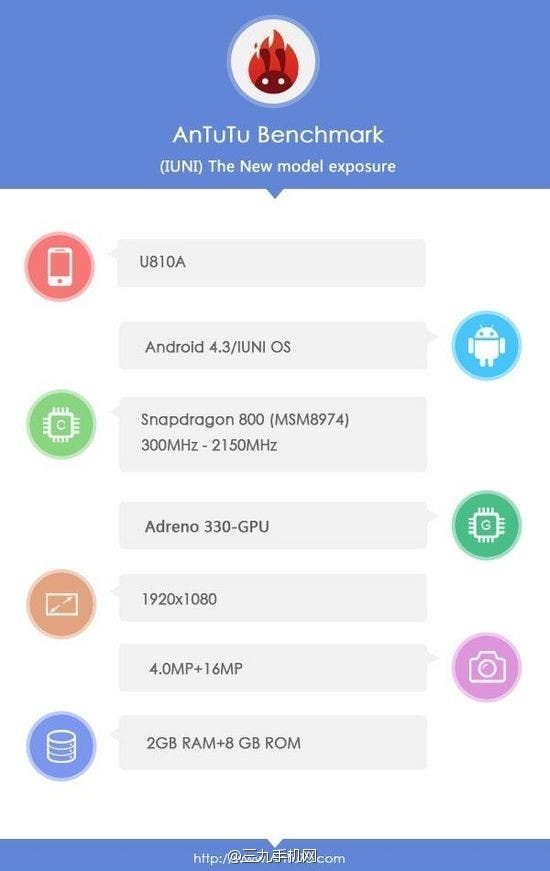 Specifications are close to the Mi3 which it is targeting with a 1920 x 1080 display, Snapdragon 800 processor, Adreno 330 GPU, and 2GB RAM. There are also some notable upgrades over the Mi3 too with a 4 mega-pixel main camera, 16 mega-pixel rear and Android 4.3, plus expandable storage!

Pricing is very competitive too and IUNI plan to sell the IUNI U2 for just 2000 Yuan in China ($320). No details to if the phone support 4G LTE, but if it does, Xiaomi, OnePlue and others are going to have a surprise rival on their hands!