The Mediatek MT6595 processor is a large step in the right direction for Mediatek processor. The chip is an 8-core SoS similar to the current MT6592, but will be based on Cortex A7 and Cortex A17 cores running in a big,LITTLE set up. big.LITTLE is also what Samsung use in their Exynos processors and means that the 8-cores will switch from the A7 to A17 depending on the task the SoC is required to perform.

We also understand from leaked road maps that the MT6595 will be one of the first Mediatek processors to have support for 4G LTE networks. 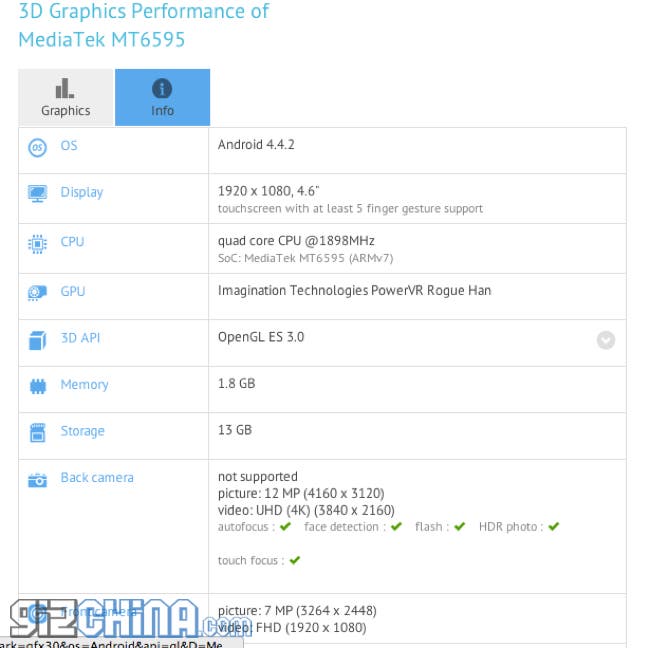 Anyway, back to what GFX Bench tells us about the processor. According to the database, the MT6595 is being tested in a phone with 4.6-inch 1080 display, 2GB RAM, 16GB memory, 12 mega-pixel main camera and 7 mega-pixel front. The chips is shown to offer the following features:

GFX Bench also tells us the graphical prowess of the Mediatek MT6595, but if you were hoping for a Snapdragon 800 killer you might want to turn away now. In the Manhattan test the MT6596 managed 398 frames (6.4fps) while it failed the more demanding T-Rex test.

On the bright side this is the first GFX test we have spotted and might just be an early version of the chip needing optimizations. Let’s keep our fingers crossed.