With Qualcomm gobbling up a sizeable chunk of Mediakek’s mid-range business in China, the Taiwanese chip maker will be pulling out all the stops and release 3 new LTE processors for smartphones.

Mediatek have been slow to release an LTE chipset allowing Qualcomm to gain an important market share by supplying big name Chinese brands such as Vivo and Oppo. Not only LTE but even some 3G phones, such as the Redmi line from Xiaomi, have also switched to a Qualcomm chip. With high-profile companies jumping ship Mediatek need to do something quick!

Before the end of this year we will see the release of 3 new processors from the Taiwanese chip maker. Obviously the chip most of us have been waiting for is the MT6595, but that’s not the only LTE processor Mediatek have ready.

Even after over a year in production the original quad-core MT6589 platform is a popular choice with Chinese phone makers, but not for much longer. To replace the MT6589, Mediatek have developed the MT6732 a quad-core Cortex A53 chipset. LTE is the major upgrade here, however faster date connectivity has mean the SoC is only rated for a 720hd display and still only supports a 13 mega-pixel camera. The MT6732 will be the chip of choice for sub 1000 Yuan ($130) LTE smartphones for the coming year.

This year started off as the year of the octacore phone, but in reality it has been the quad-core MT6582 chipset where we have seen in the majority of new and exciting Chinese phones. The MT6582 will be replaced with the LTE equipped, octacore Cortex A52 MT6572 processor. Along with LTE support the new chip can now handle 1080FHD displays (the MT6582 could only do 720p), 16 mega-pixel cameras and can also capture 1080 video. With this sort of power and these features expect some very special mid-range Chinese phones coming soon!

The MT6595 is the big daddy, the processor we have all been waiting to see, and the one which could finally take on the mighty Snapdragon 801. On paper the MT6595 looks stunning with big.LITTLE Cortex A7 and A17 architecture, up to 2.2Ghz processor speed, support for 20 mega-pixel cameras, 4K video capture and support for WQXGA (2560 x 1600) panels! Of course LTE will be included too! 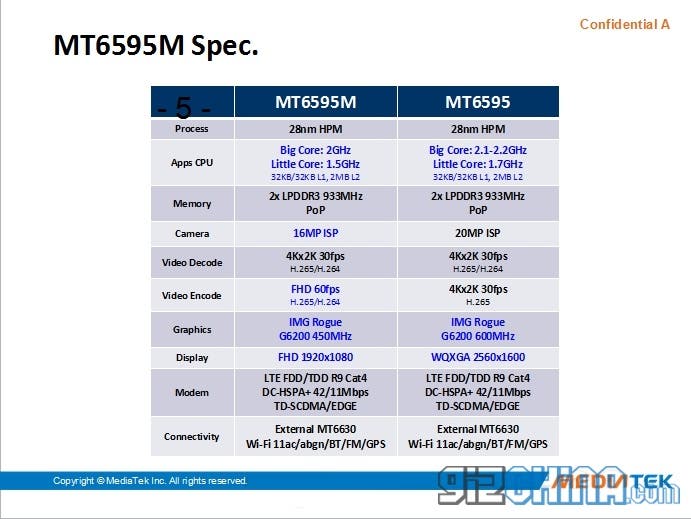 The MT6595 will come in two flavours, the standard version with the above specs and the MT6595M with slightly slower 2Ghz processing speed, 16 megapixel camera support, and 1080FHD display limitations.

When can we see phones with next-gen Mediatek processors?

The first phones with MT6595 chipsets will be on sale by the 3rd quarter of this year, phones running the other processors will probably be first seen early in 2015.

Do you think Mediatek can keep up with Qualcomm’s popularity with big name brands?

Next The Xiaomi factor: 4 emerging markets surveyed, showing exactly how popular the brand is