Although the Minix Neo X7 isn’t the newest device on the TV hub scene, we at GizChina thought we’d been concentrating on phones too much, so here’s something different – a TV box/hub review.

The device was released late last year, and comes with some respectable hardware when you consider the price it goes for. At just $135 apiece, the Neo X7 is a decent piece of hardware, but is it good enough to take on the crop of new, low-priced ultra portable computers from mainstream or better known manufacturers? Lets find out in this Minix Neo X7 review!

The Minix Neo X7 offers decent computing strength thanks to a quad-core Cortex A9 CPU that’s clocked at 1.6GHz, along with a good 2GB of RAM to keep your apps from being cached all the time. While these may not sound like the most killer specs, they are pretty good for what the device is made for – occasional web browsing and a lot of video.

It isn’t meant to replace your desktop or anything, so knowing what to expect certainly helps. Unlike most other cheap TV boxes from China, the Minix Neo isn’t a ‘stick’; it looks more like a WiFi router, in shape as well as size.

You can also visit the product page on the official Minix website to get a better insight about the device.

Chinavasion also sent us an air mouse, the Minix Neo A2, which to say the least, is a must have if you plan to use any sort of a TV box. At $32 a piece, the Neo A2 air mouse is a steal with the features it boasts. Just to give you an idea, the Neo A2 comes with the usual Android controls (app switcher, home, menu, back, Dpad, etc.), and additionally also works as a keyboard (QWERTY) and a speaker/mic combo, which makes it an ideal accessory for those who frequently use VoIP services.

The Neo X7 comes powered with the Rockchip RK3188 CPU, an SoC which happens to be a favourite among Chinese tablet makers. There’s also a good 2GB of RAM, along with dual band WiFi included in the usual radio features. 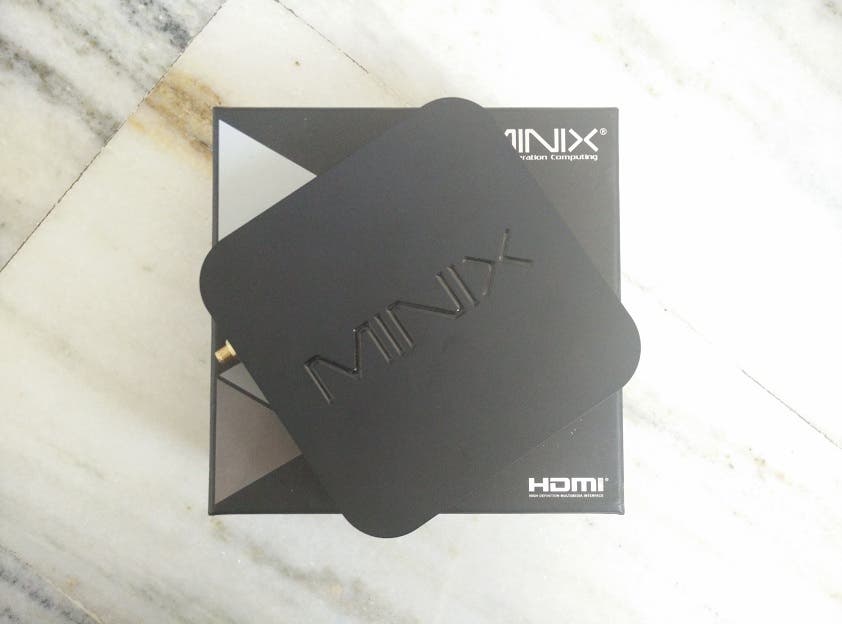 The Neo X7 comes in a very sturdy (and surprisingly heavy) box made out of cardboard. The box showed no signs of damage after its journey from China to India, to cover which it took around 3-4 days.

Taking the top lid off, you’re greeted with the TV box itself which can be a bit tricky to remove the first time because of a knob that pokes out and sits partly in the housing. Once you get through it, you get access to the rest – power adapter (5V, 3A, EU plug), some paperwork, a USB to microUSB cable, an HDMI cable, remote (stock, not the Neo A2), and lastly an OTG cable which you can use should the 3x USB ports fall short of your requirements. 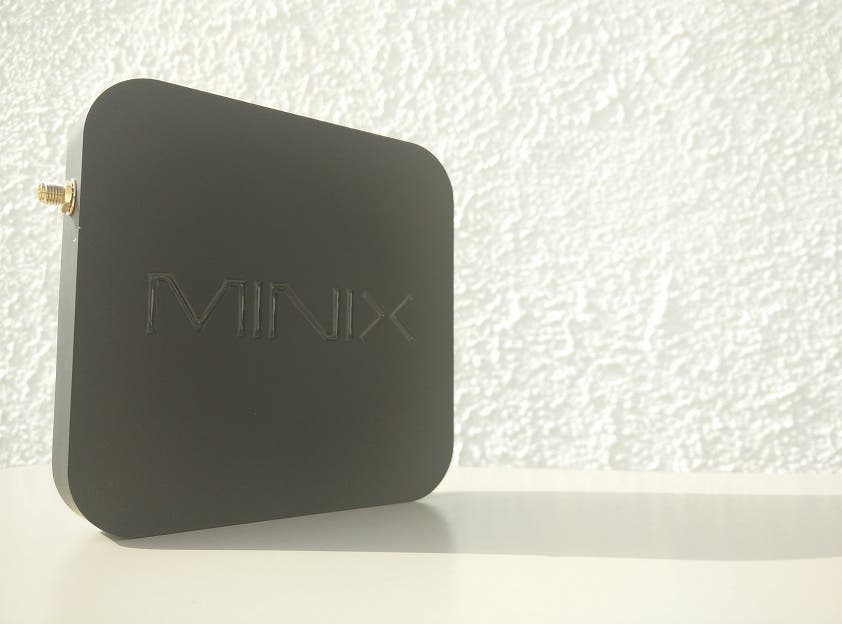 As just mentioned, the Neo X7 is quite a departure from the El Cheapo Android sticks that China churns out without thinking twice. It is in fact a very well made, sturdy ‘box’ that commands a bit more attention than the TV stick that hides on the back of your TV. Made to look like a set top box, the Minix Neo X7 has quite a bit of bulk to it, given its size and objective.

The TV box is all plastic, but a very high quality at that. Holding the box in your hand (which you perhaps will do once or twice in its lifetime) gives you a feeling of sturdiness; in fact, I managed to drop the box from about 4 feet on concrete flooring while taking pictures of it, and it survived largely unscathed.

All in all, we’re very happy with the physical aspect of the device. This could be because we didn’t expect this much; we’re happy nonetheless, and you will be too.

Since the Neo X7 reminded us of a WiFi router, we decided to do a direct photo comparison. Not only that, we also put it against the ASUS Chromebox to give you an idea of its dimensions, scale, etc. 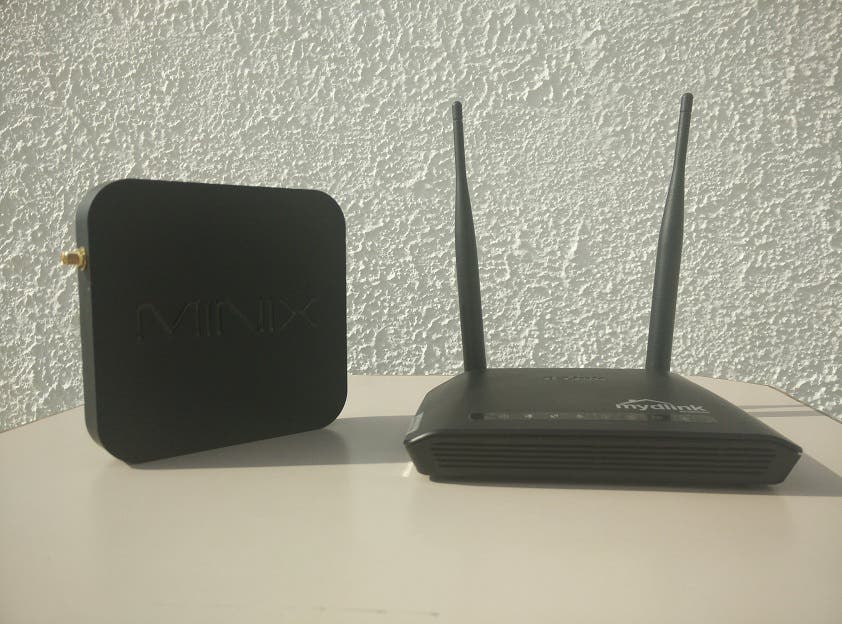 As is pretty obvious from the pictures above, the Neo X7 is largely similar to the ASUS Chromebox is length and breadth, but the Chromebox is a little over 2x thicker than the Neo X7.

Just something we noticed while handling the Neo X7 was that the weight distribution wasn’t the best; not that it is a deal breaker or anything, but it feels good to have a device with the weight uniformly distributed. Anyway. 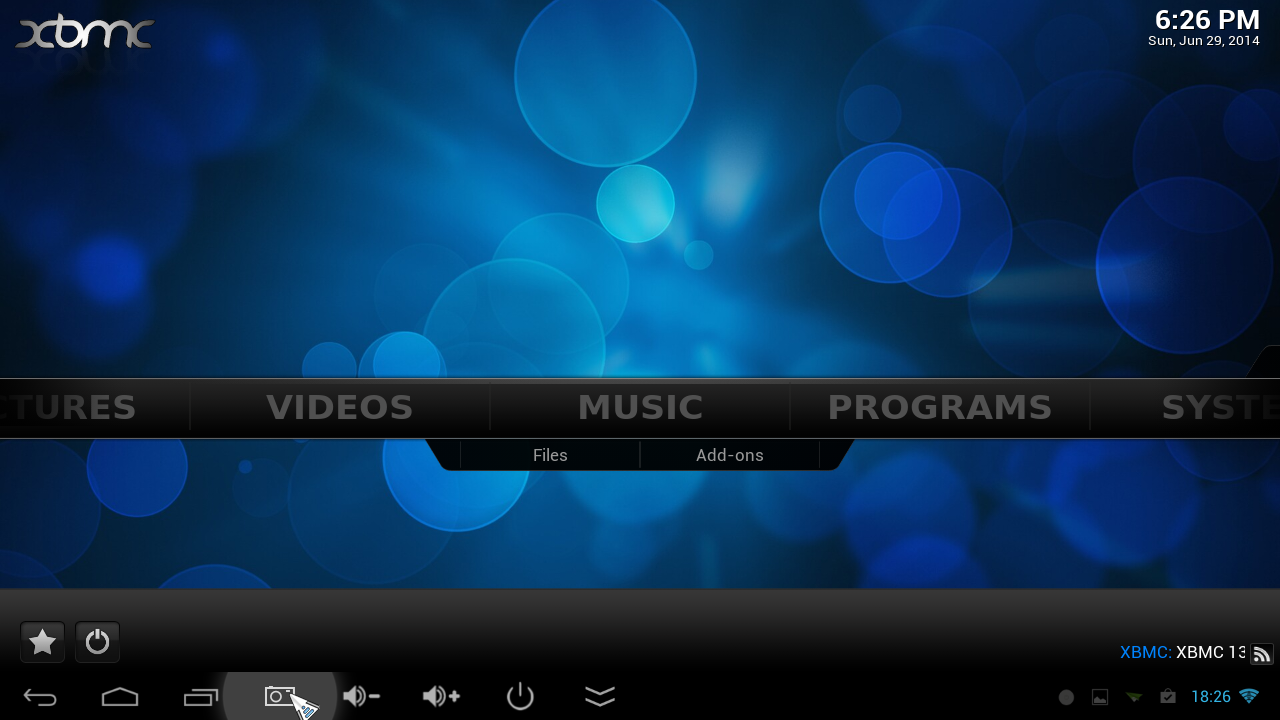 The Neo X7 is far from the fastest booting device, unfortunately. It takes an agonizing 45-50 seconds to boot up, which really isn’t great. On the other hand, you probably will boot it up only once per day on an average, so it too big a deal. For those who still think it is a big deal – the Neo X7 features a sleep mode which you can use to save on power when the device is not in use. 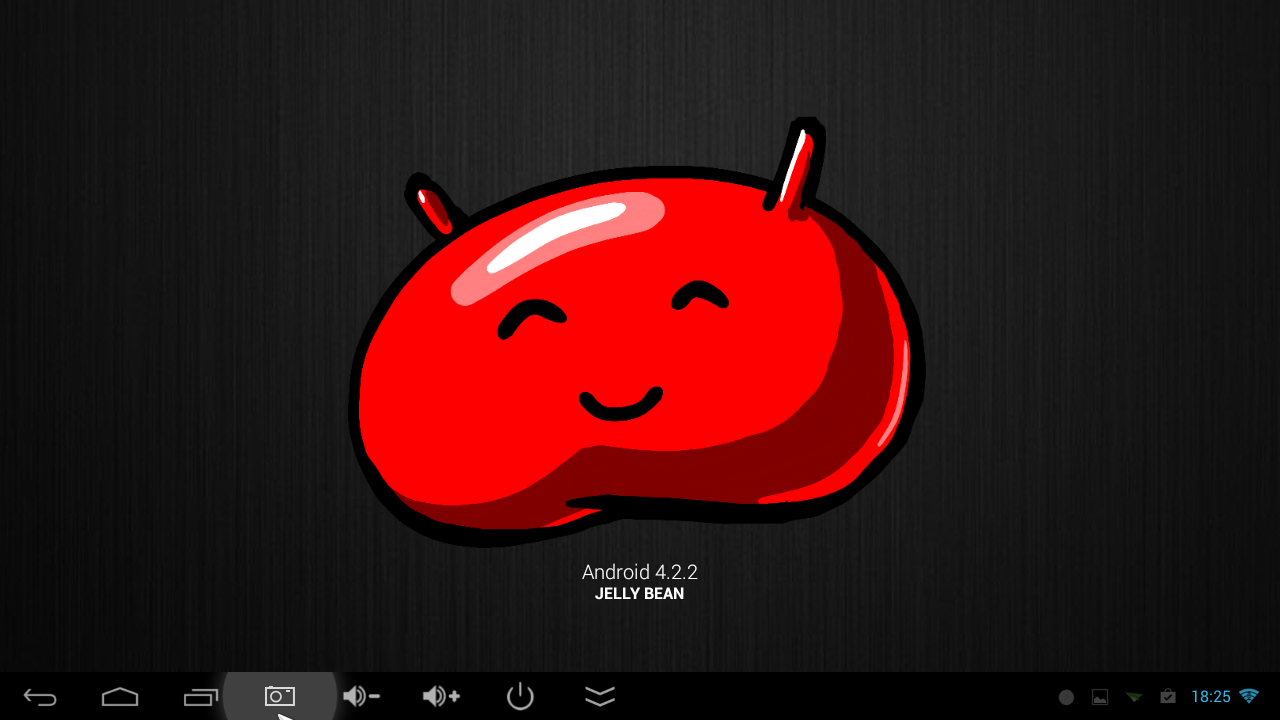 Although Google only recently announced the extended Android support for home devices, makers such as Minix have been flashing Android on their TV boxes for quite a while now. The Neo X7 comes with version v4.2 Jelly Bean, which as you would’ve guessed comes with some TV box specific customizations.

Minix have an alternative for almost every other apk found in the system, right from settings to the video player. Not that these have any different functionality, just that the customized apps are easier to use on the large screen thanks to large icons and fonts.

What’s good about the software is that Minix have given it a fair share of tweaking, but have also left stock apps for the purists. For example, you will get to choose between the forked settings app and the stock Android settings app: 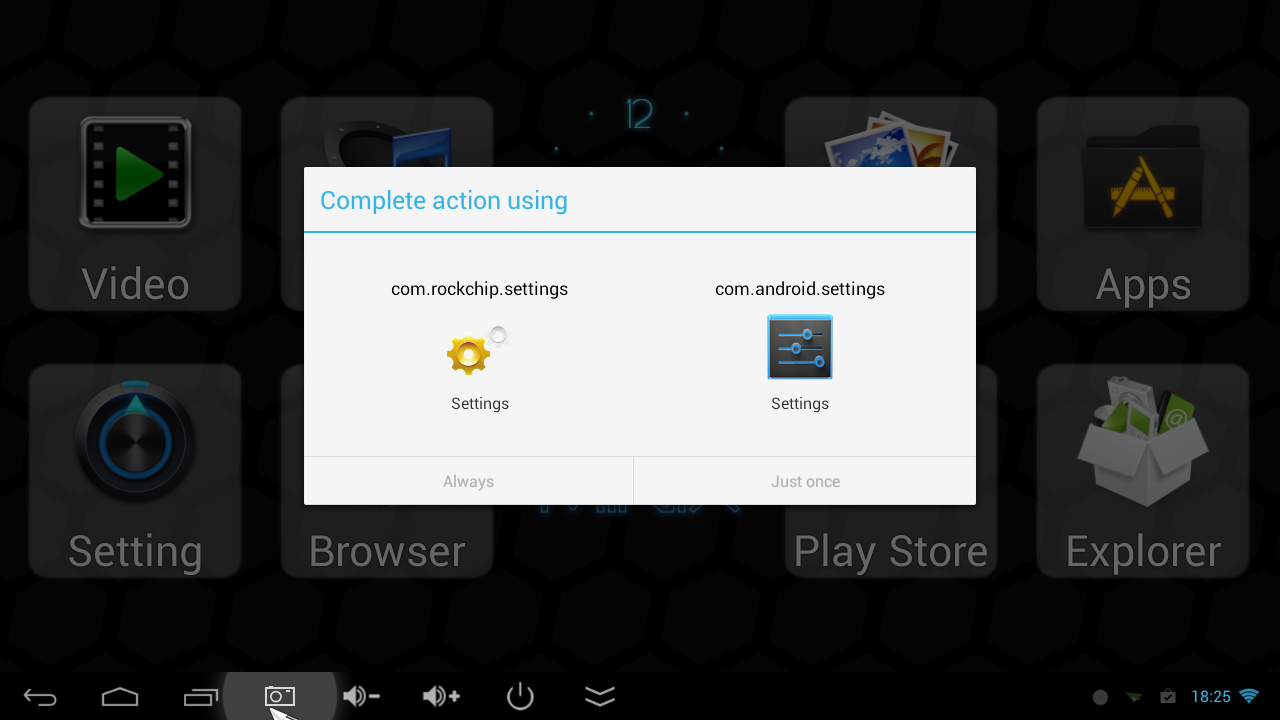 Besides the slow boot, we found the OS to be fast and responsive each time. Apps don’t take much time to load, and hardly ever do you find them being cached in the memory. However, we think that the device is primarily meant to be a home entertainment system more than anything else; the fact that you can browse the net and install Android apps from the Google Play store is an added bonus.

Nonetheless, we conducted a few benchmarks and here’s the findings for you:

We tested the wireless display functionality on the Neo X7, using a Xiaomi Mi2S and a OnePlus One. For some reason (newer Android version?) the framerate was noticeably higher with the OnePlus One.

We used the Neo X7 with a USB drive, a Logitech mouse/keyboard combo and of course, the Neo A2 air mouse, and the Neo X7 recognized all of them instantly. However, the Neo X7 was unable to recogize the OnePlus One when connected. This was because the Neo X7 doesn’t understand the MTP protocol; we were, however, able to access photos and videos when connected in camera mode. Android will have to introduce compatibility for parent devices (those that accept connections on OTG) for the MTP protocol in the near future, and we hope it happens soon. 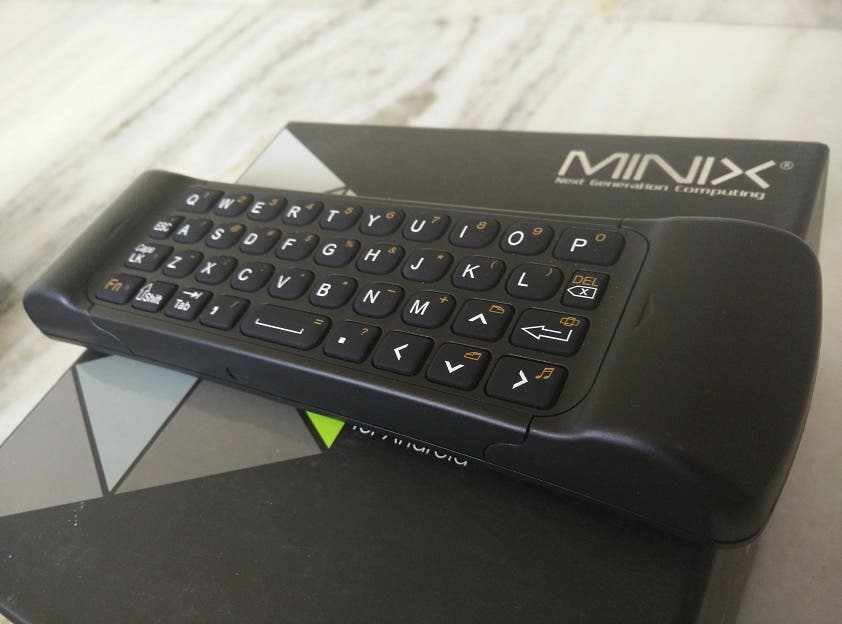 This little giant deserves a special applaud. We don’t think we’d have liked the Neo X7 as much if it weren’t for the A2; that’s how much we like this air remote. It comes with a built in gyroscope which makes it a very precise air mouse. The keyboard on the rear is something really cool at first, and very usable and practical later on. Buttons on the keyboard provide a great amount of feedback, and thanks to the function button, most of the usual functionality is covered even though there aren’t too many buttons.

Should the mouse behave badly, you can re-calibrate it using the Fn + Y button combo. This and a few other nifty tricks are mentioned in the user’s manual which make the A2 a really worthy addition to go with the X7 or any TV box you might already have.

The Minix Neo X7 is a great device if you’re looking for an affordable and decently powered Android TV box for your home entertainment system. We don’t think Android TV boxes have reached the point where people will buy them solely for the functionality provided by the Android OS, because it can have a few niggles with touch based apps and the likes. However, for a wireless streaming device with added features, the Neo X7 is well worth it. 5GHz WiFi is a boon if you stay in an area full of WiFi networks, and its not something usually seen in Chinese TV boxes.

2GB RAM, out of the box support for XBMC and features like DLNA make the device well worth the money, and the build quality on offer takes it up to the VFM proposition Chinese devices are best known for.

So that’s that. Let us know if you have any questions, we’ll try our best to answer them in as much detail as possible!

We’d like to thank Chinavasion for providing us the Neo X7 for review!