On July 22nd Xiaomi hare going to launch their assault on the 2014 flagship war with the Xiaomi Mi4. But rumours are warning us to expect less in the hardware and more in the details for this new Mi phone.

Each and every year Xiaomi launch a flagship phone that gets all the latest specs and costs only 1999 Yuan ($320). It’s what has worked for the past few years and has been so successful that Huawei and OnePlus have copied the model. For the Xiaomi Mi4 though we could be in for a change.

Xiaomi have always been about offering the best hardware at the best prices, but this is a trick that many companies are emulating, and some current technologies are deemed by many as simply not worth having (2K displays for example).

Rumours coming from within the Xiaomi camp and backed up by leaked benchmarks, and screenshots seem to tell a new story will revolve around the Mi4, one which will see the company focus on design, and optimisation first rather than offering leading hardware.

Benchmarks, such as the ones above, tell us that the Xiaomi Mi3 will have the same Snapdragon 801 processor as the OnePlus One, and Adreno 330 GPU, 5-inch 1080 display, 8 mega-pixel front camera, 13 mega-pixel rear, 3GB RAM and 16GB internal memory. If you’re familiar with the Mi3 then most of the those features will come as a disappointment, the only upgrades being the OS version, additional RAM and new front camera.

If these details are accurate then we are forced to take a look at other rumours, ones which tell us that the Mi4 is “the best looking Xiaomi phone to date” and is made completely of metal rather than plastic with narrow screen bezels to keep the overall size down to a minimum.

Camera features are believed to have been updated for this new phone too. So we could be looking at an aperture of F1.8 or less and should see some serious updates in the camera application department.

Speaking of apps, MIUI is belived to have been updated to V6 for the Xiaomi Mi4. The new version number will be based on Android 4.4.2 and will get a new flat look. We should also see new features such as gesture support, slow speed shutter etc.

Finally the biggest update might be availability. Xiaomi are now such a large company that they may no longer need to wait for hardware prices to drop before they start making a profit on their devices. This could mean two possible outcomes 1) we might see the Xiaomi Mi4 launch at a lower price than before, or 2) we could see better availability for the next generation flagship. This would be a major plus for Xiaomi and one which fans around the world would appreciate.

Then again the benchmarks might just tell us that an Mi3S will be launched and that the Mi4 hasn’t been leaked yet. Either way we wait with baited breath to see what Xiaomi pull off for this year. Possibly this?: 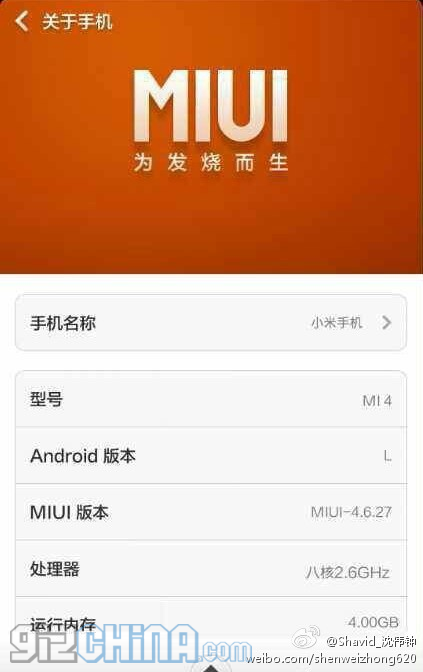 What are your predictions for the Xiaomi Mi4? Let us know in the comments below.

Previous Huawei is ready to update the look of Emotion UI with 3.0

Next Jiayu S2 Gold and all black editions coming soon