To say the Mediatek MT6595 performs well is a total understatement! The new octacore processor from the Taiwanese chip maker is truly brutal!

Although this is not the first octacore processor from Mediatek, it is the first to have integrated LTE and the first MTK SoC to use big.LITTLE architecture similar to that found on the Samsung Exynos range of octacore chipsets.

Leaked benchmarks promised that the MT6595 could be a real bruiser of a mobile processor, but we couldn’t be certain of the performance until the official launch earlier today in Shenzhen. At the even Mediatek bosses confirmed the power of their latest, posting a screenshot claiming the new chip can score over 47,000 points in Antutu!

The MT6595 is the most advanced processor from Mediatek to date, and will be the SoC that will help local Chinese phone makers build flagship killers and equally killer prices!

Specifications of the chipset include support for 20 mega-pixel cameras, 2560 x 1600 resolution displays, WCDMA, TDD-LTE, FDD-LTE and GSM, and camera features including slow motion and ultra HD video recording that previous MTK chips were not capable of. Audio has been enhanced also with supper for FLAC formats. 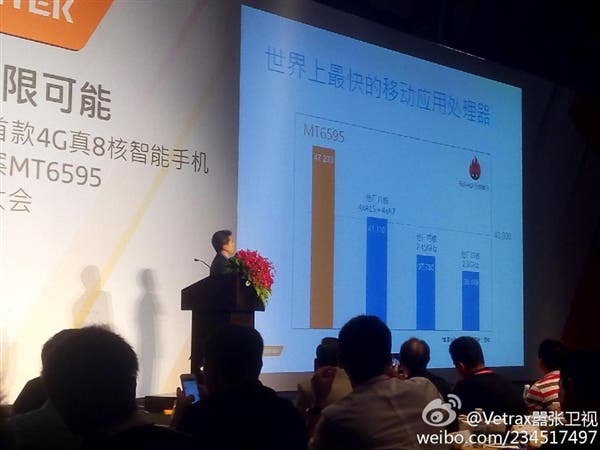 The MT6595 can be clocked at 2.2Ghz is likely to be the processor we will see in a number of high-end phones. Rumours even suggest that Meizu could be using the SoC for their more affordable Meizu MX4 phones which should launch in the next few months.