Elephone have posted a tutorial on their forums showing how the fingerprint scanner on the latest Elephone P2000 can be used to lock individual apps.

The Elephone P2000 was recently released with some interesting hardware choices and features. One feature being the rear mounted fingerprint scanner to give the phone some added security. By default the scanner is meant for simply locking and unlocking the phone, but it an also be used to lock individual apps.

Let’s say you like to have quick access to your phone for photo ops, but you have sensitive apps in your phone. Adding a pin code slows the unlock down, as does a fingerprint scanner (although marginally). Instead why not have your phone unlocked and just protect your sensitive data?

The Elephone P2000 has the ability to do this. Using the built-in scanner head in to the settings and the rear mounted scanner you can secure all your important apps. 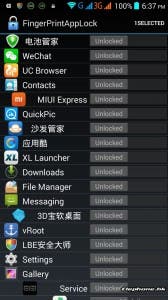 To activate this simply head in to Settings > Finger Scanner > Finger App Lock. You should be promoted to use your fingerprint to access the next step that shows all the apps. From this list you can choose to have them open normally or require a fingerprint scan to open them

It’s a handy feature, great for anyone who wants to keep sensitive data out of other people’s hands.

Next Dual-core Lava Iris 460 shows up on official website