Among the best looking phones from Micromax, the Canvas Knight is all set to get a bit more powerful, or at least optimized thanks to an Android v4.4.2 update.

The Micromax Canvas Knight was launched back in March, advertised as a premium-built octa-core smartphone. A few months after that, in June, Micromax started offering the device with Android v4.4 KitKat (it was launched with v4.2 Jelly Bean), but this is the first time the update is being rolled out to existing customers. 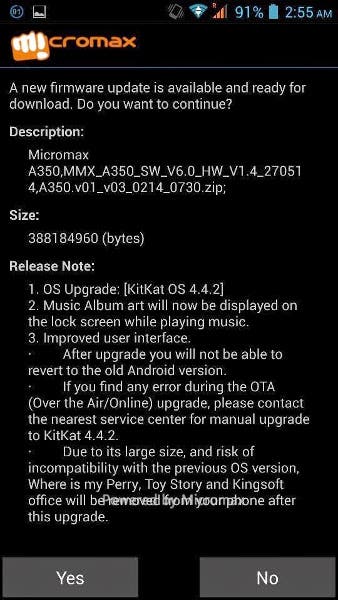 The Canvas Knight features a 5-inch 1080p display and the 2GHz MT6592T octa-core CPU, besides other flagship-level specs including 2GB of RAM and a 16 mega-pixel rear camera, and retails for about 19,500 INR or roughly $320.

Chinese manufacturers first started the ‘KitKat revolution’ for MediaTek phones, with Elephone being among the very first. MediaTek based phones have often been on the receiving end of some high-intensity criticism, for the lack of software updates. However, things seem to have changed for the good!